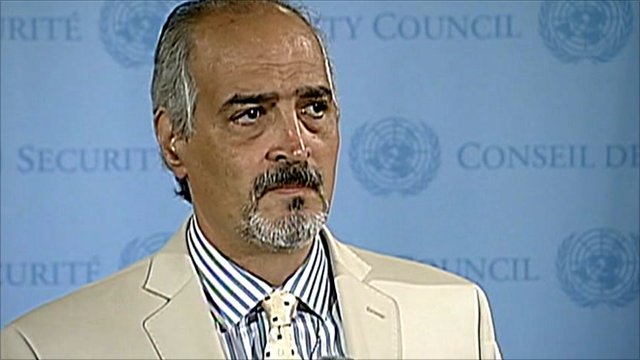 Click to play
Syrian UN ambassador Bashar Jaafari said: "There is no need for any UN investigation commission"
Continue reading the main story

Some 200 members of Syria's ruling Baath party are reported to have resigned over the violent crackdown against pro-democracy demonstrations.
The resignations were centred on the southern city of Deraa, a focal point of violence that has allegedly killed 450 people in six weeks.
Shooting was heard in Deraa overnight, where the government this week sent tanks and troops to regain control.
Meanwhile, the UN failed to agree on a statement condemning the crackdown.
A draft proposed by France, Britain, Germany and Portugal was opposed by several within the 15-member Security Council, with Russia insisting events in Syria were not a threat to international peace.
President Bashar al-Assad's government disputes the Western view that the demonstrations have been non-violent.
In a statement carried by the official news agency, it said it had sent troops to several cities on the request of citizens who were worried about "armed extremists". Opposition leaders say the protests are peaceful.
Foreign media ban A declaration signed by the Baath party officials in Deraa said they were quitting to protest against the violent crackdown, Reuters reported.

Jim Muir BBC News, Beirut
While those who have resigned are not high-ranking national figures, their public resignations and statements of denunciation are significant given the monolithic status of the Baath party, which has ruled Syria since it took power in a 1963 coup.
The defections indicate the government is losing political control of those areas - losing the hearts and minds - and is resorting to sending in tanks to impose control by force.
Meanwhile, President Assad has known from the beginning that the Arab and outside worlds would not unite against him as they did against Colonel Gaddafi in Libya, so the failure of the UN Security Council to reach agreement comes as no surprise.
In any case, it would not have affected events on the ground, where the regime is struggling to stifle its more serious challenge in nearly 50 years.

"In view of the negative stance taken by the leadership of the Arab Socialist Baath Party towards the events in Syria and in Deraa, and after the death of hundreds and the wounding of thousands at the hands of the various security forces, we submit our collective resignation," said the statement.
The resignations follow those of 30 Baath officials from the restive coastal city of Baniyas, north-west of Damascus.
On Wednesday, footage posted on the internet appeared to show Syrian tanks heading towards Deraa to reinforce troops who had moved in on Monday.
Amnesty International quoted eyewitnesses as saying army snipers were shooting at wounded residents lying in the streets and that other people were trying to save them.
But with communications apparently cut off from the city, it is hard to be sure what is happening there.
Despite the crackdown, though, protesters have designated Friday a "day of rage" throughout the country: They say there is no turning back.
'No need to investigate' On Friday, the UN Human Rights Council is due to hold an emergency session to consider a draft resolution demanding an immediate end to President Assad's efforts to crush the challenge to his rule. Continued
at April 28, 2011