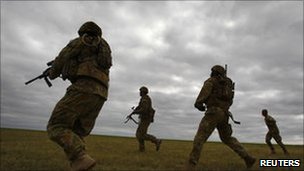 Two men have been charged over a sex scandal at an Australian defence academy, in a row which led to a review of the military's treatment of women.
The cadets from the Australian Defence Force Academy are accused of secretly filming a female cadet having sex and broadcasting it on the internet.
They have been charged with misusing an electronic communications service. One has been charged with an indecent act.
The government has set up a number of inquiries in response to the scandal.
The 18-year old female cadet said that she had consensual sex with a fellow first-year cadet, which was then transmitted via webcam to six other cadets watching on a computer in another room.
Photographs of the encounter were also said to have been circulated around the academy.
The two men, aged 18 and 19, face possible jail terms if convicted.
The commander of the academy was ordered to take leave in the wake of the incident and at least two inquiries were initiated.
Sex Discrimination Commissioner Elizabeth Broderick was asked to conduct a review into the treatment of women both at the academy and in the wider military.
Reviews were also ordered into the use of alcohol and social media in the military.
The scandal followed another relating to the navy.
In February, the defence department released a report chronicling what it called a culture of predatory sexual behaviour on board the naval supply ship, HMAS Success.
It revealed a fiercely tribal culture in which women sailors were treated with disdain, alcohol was badly misused and discipline had broken down.
at April 29, 2011