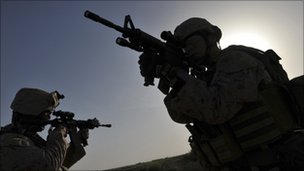 International forces in Afghanistan say they have killed their number two insurgent target in the country - senior al-Qaeda leader Abdul Ghani.
The Saudi citizen died in an air strike almost two weeks ago in Kunar province, near Pakistan, Nato-led forces said.
Abdul Ghani, also known as Abu Hafs al-Najdi, ran training camps and planned attacks on tribal leaders and foreigners, the Nato statement said.
Nato estimates some 100 al-Qaeda members still operate in Afghanistan.
The alliance says it has killed more than 25 al-Qaeda leaders and fighters in the past month. There is no independent confirmation of the claim.
A spokesman for the Nato-led International Security Assistance Force (Isaf) would not say who was number one on the most wanted list, citing the possibility of hampering the search.
Abdul Ghani has been blamed for directing a number of high-profile attacks - including the death of Malik Zarin, a tribal leader in the east who was a close ally of President Hamid Karzai.
Zarin and nine other people were killed in a suicide attack on the same morning as the militant leader's own death.
'Significant' Ahmed Rashid, an expert on the Taliban, told the BBC that the death of Abdul Ghani was a significant achievement for Nato.
"He's been helping organising some of the Pakistan Taliban groups on the Pakistan side of the border, and was obviously trying to do the same on the Afghan side of the border," Mr Rashid said.Continued
at April 26, 2011