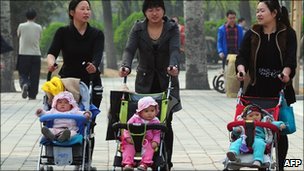 China's census shows its population grew to 1.34 billion people by 2010, with a sharp rise in those over 60.
Nearly half of all Chinese now live in cities and people over the age of 60 now account for 13.3% of the population, up nearly 3% since 2000.
But the figures reveal that China's population is growing more slowly than in the past.
That could affect the economy, as the number of potential workers, especially from rural areas, could shrink.
The proportion of mainland Chinese people aged 14 or younger was 16.6%, down by 6.29 percentage points from the last census in 2000.
The number aged 60 or older grew to 13.26%, up 2.93 percentage points.
Chinese snapshot
When China carried out its first census in 1953 it had a population of 594 million, less than half the current figure.
This census, the first in 10 years, comes after a decade of rapid economic growth that has led to significant social change. Continued
at April 28, 2011