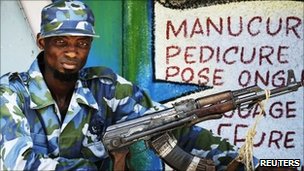 Fighting has broken out in the main Ivory Coast city, Abidjan, between forces loyal to the new president and the "Invisible Commandos" militia.
The Invisible Commandos helped Alassane Ouattara to power and gained control of parts of Abidjan during the four-month dispute after November's poll.
But they have since fallen out and residents say they can hear gun- and rocket-fire.
A militia spokesman said they were attacked as they were about to disarm.
Mr Ouattara's predecessor, Laurent Gbagbo, was captured two weeks ago by pro-Ouattara forces after refusing to step down when he lost the elections.
The backbone of these forces swept down through the country from their northern bases, three months into the stalemate.
In Abidjan, they were joined by Ibrahim Coulibaly, who led the Invisible Commandos as they gained control of northern parts of the city in the weeks before the main offensive against Mr Gbagbo began.
However, the two groups clashed in Abidjan last week as Mr Coulibaly said he wanted recognition for his role in overthrowing Mr Gbagbo.
The new government says an investigation into alleged crimes committed by Mr Gbagbo and his associates has begun.Continued
at April 27, 2011