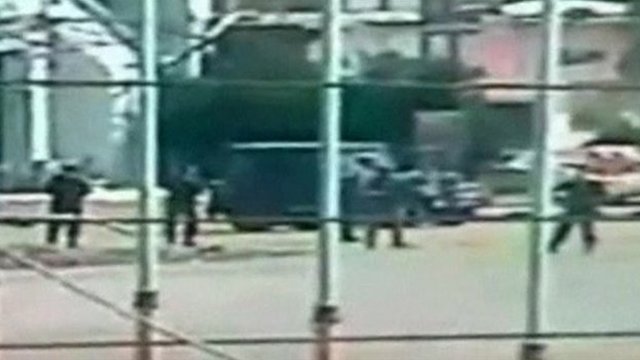 The army has seized control of a mosque which had become a centre for anti-government protests in the southern Syrian city of Deraa, witnesses say.
Soldiers are now stationed on the roof the Omari mosque in the city centre, after an assault supported by tanks.
Activists said six people had been killed in the city. On Friday, they reported at least 66 protester deaths in Syria, most of them in Deraa.
Officials said the number of dead was far lower, and included four soldiers.
State television said security forces had come under attack by "armed terrorists" in Deraa and Homs, Syria's third city.
In other developments on Saturday:
'Operations intensifying' Foreign journalists are not being allowed into the country, and the exact picture of what is happening remains unclear.

End Quote Abu Ahmed Deraa resident
However, residents of Deraa said the assault on the historic Omari mosque involved troops backed by tanks and heavy gunfire. It took about 90 minutes for the army to gain control, they added.
"The shelling has stopped. There are snipers on the roof of the mosque," one man told the Reuters news agency, adding that forces appeared to be in control of the city's old quarter for the first time.
Earlier, another resident, Abu Ahmed, said: "It looks like [the security forces] want to finish their campaign today. From the new tank deployments, it looks as though they are intensifying their operations."
The Omari mosque has been a focus of the protests in Deraa since mid-March. Continued
at April 30, 2011