Yemen unrest: Doubts over deal as Saleh fails to sign 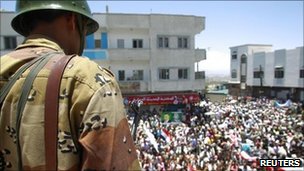 A deal for Yemen's veteran leader to hand over power and end unrest looks in doubt after President Ali Abdullah Saleh failed to sign it.
He had been expected to add his signature on Saturday after his officials said the deal brokered by Gulf Arab states had been accepted.
Mr Saleh reportedly said he would only sign the agreement in his capacity as head of the ruling party.
Opposition spokesmen insist he must sign as president.
The Gulf states' mediator, Abdul-Latif al-Zayyani, is now believed to have left the capital, Sanaa.
New clashes in the Yemeni port of Aden have left three people dead.
Officials said two of the dead were members of the security forces, shot while trying to dismantle road-blocks set up by protesters in the al-Mansoura district.
The third person killed was a civilian.
Deal 'thwarted' Mr Zayyani, the secretary general of the Gulf Cooperation Council (GCC), flew into Sanaa to urge President Saleh to sign the deal, which had been accepted by Yemen's ruling party a week ago.

Yemen and its leader 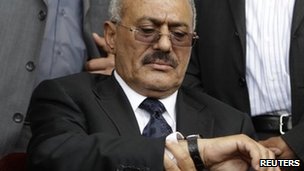 Under its terms, the president would hand power to his vice-president in return for immunity from prosecution.
But the president was insisting he should sign it in his capacity of leader of his party, the General People's Congress, according to a close ally of Mr Saleh, Abed al-Jundi.
He added that Mr Saleh also wanted to ensure that he would remain president to oversee a 30-day transition period after signing the deal, the Associated Press news agency reports.
Sultan al-Atwani, an official from Yemen's main opposition group, accused the president of "thwarting the deal".
He said Mr Zayyani had informed the opposition that Mr Saleh had "refused to sign in his role as president".
"He said he wanted to sign as head of the ruling party, and this is a violation of the text of the Gulf initiative," Mr Atwani told Reuters news agency.
Mr Zayyani later left Sanaa, AFP news agency reports.
The opposition coalition approved the deal earlier only after its leaders had received "assurances" from the GCC, the US and Europe on the transfer of power.
However, the deal drove a wedge between the opposition coalition and youths who have led demonstrations against the president across the country for months.
They accuse the politicians of breaking a promise to put Mr Saleh on trial.
at April 30, 2011