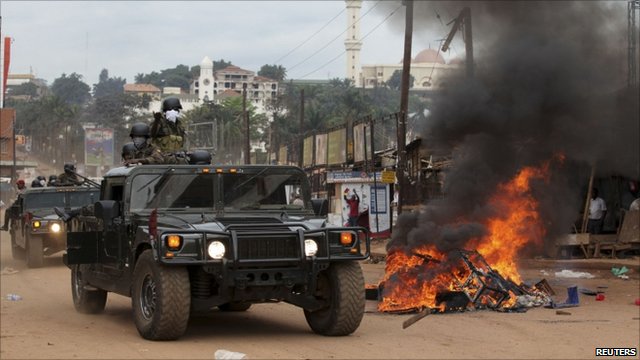 At least two people have died in riots in Uganda's capital over the treatment of opposition leader Kizza Besigye.
Security forces fired live ammunition, rubber bullets and tear gas to disperse protesters burning tyres.
Dr Besigye sought medical treatment after being tear-gassed in his car and bundled roughly into a truck when he was arrested on Thursday.
He later left Uganda for treatment in Kenya, and witnesses said he had to be supported as he boarded a plane.
It was Dr Besigye's fourth detention this month for his participation in a "walk-to-work" protest over high prices.
President Yoweri Museveni has said the walking campaign over the rise in the cost of living is illegal.

End Quote Brown Ndese protester
Ugandan Information Minister Kabakumba Matsiko told the BBC the situation was now "under control" and the unrest would not be allowed to carry on.
"I would like to reassure the world that the government is in charge, and we are going to improve the security situation. We're not going to encourage worthless demonstrations which don't have clear and genuine objectives to continue," Mr Matsiko said.
Pepper spray After his arrest on Thursday Dr Besigye was charged with inciting violence but was released on medical grounds until 2 May.
The BBC's Joshua Mmali in the capital, Kampala, says Dr Besigye was taken to hospital from the court because he had been temporarily blinded.
On Friday evening, he was allowed by the authorities to fly to Kenya.
Our reporter says footage of the arrest was broadcast on Ugandan television and the video-sharing website YouTube.Continued
at April 29, 2011