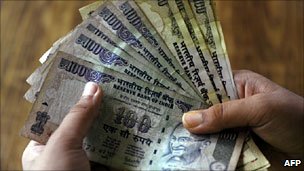 Staff at an Indian bank have been blamed for allowing termites to eat their way through banknotes worth millions of rupees.
Staff at the bank, in the state of Uttar Pradesh, are reported to have been found guilty of "laxity".
The insects are believed to have chewed their way through notes worth some 10 million rupees ($225,000/£137,000).
A similar incident happened in 2008, when termites in Bihar state ate a trader's savings stored in his bank.
The State Bank of India says an enquiry into the latest incident has been held.
Replaced "The branch management has been found guilty of laxity due to which the notes were damaged by termites in the Fatehpur branch of Barabanki district," State Bank of India Chief General Manager Abhay Singh told the Press Trust of India. 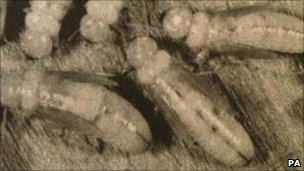 The State Bank of India has warned staff to be alert for money-grubbers
"Action will be taken against those responsible in the matter.
"As it was the bank's fault, it will bear the loss caused due to termites... there will be no loss to the public."
Ms Singh said that identity numbers on the majority of the notes were still intact, which meant that they could be replaced.
Bank officials discovered that the notes - which were kept in a strongroom - had been damaged by termites earlier this month.
Ms Singh said that directives had now been issued to all branches that stored currency in strongrooms to ensure that the condition of the cash is checked every two months.
Reports say that the branch where the money was stored was old, seldom properly cleaned and known to be a haven for termites.
"It was earlier brought to the notice of the management that termites were damaging files and furniture. Efforts are on to relocate the bank at some other place," Ms Singh said.
In the incident in Bihar in 2008, trader Dwarika Prasad lost his life savings after termites infested his bank's safe deposit boxes and ate them up.
Mr Prasad deposited currency notes and investment papers worth hundreds of thousands of rupees in a bank safe in the state capital Patna.
The bank said at the time that it had put up a notice warning customers of the termites.
at April 27, 2011