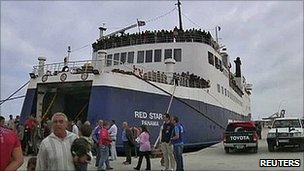 Nato says its warships have intercepted pro-Gaddafi forces trying to lay mines in the harbour of the city of Misrata.
A senior Nato official said crews were disposing of the mines.
Rebels say government tanks have launched another assault on Misrata, which has been under siege for several weeks.
In another development, Tunisian troops are reported to have captured Libyan soldiers who crossed the border in pursuit of rebel forces.
Nato's director of operations in Libya, Brig Rob Weighill, said warships stationed in the Mediterranean stopped the mine-laying attempt on Friday morning.
"Our ships intercepted the small boats that were laying them and we are disposing of the mines that we found," he told reporters via video-link from his headquarters in Naples, Italy.
"It again shows [Libyan leader Col Muammar Gaddafi's] complete disregard for international law and his willingness to attack humanitarian delivery efforts," he added.
Nato is enforcing a UN resolution to protect civilians in Libya amid a two-month revolt inspired by other uprisings in the Arab world. 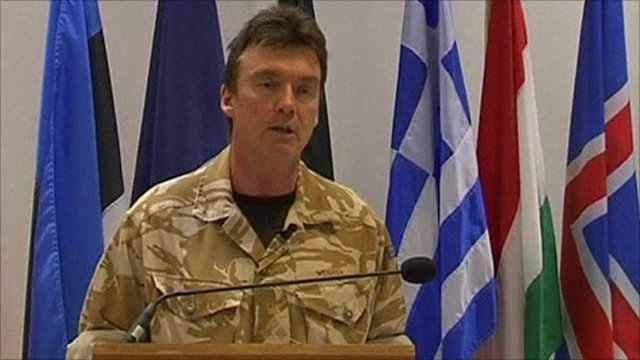 Click to play
Brigadier Rob Weighill: Warships stationed in the Mediterranean stopped the mine-laying
Human rights groups say more than 1,000 people have been killed in the fighting in Misrata and many more have been wounded.
The harbour has been a lifeline for ships ferrying the injured to hospitals in the rebel stronghold, Benghazi, and also for aid entering the city.
Brig Weighill added that rebels in Misrata had made advances in recent days.
"The rebels have expanded their perimeter significantly over the past week. To suggest they are winning would be overly optimistic," he said. "They are putting up a very spirited fight."
'Tank attack' Meanwhile, foreign journalists in Misrata reported loud explosions coming from the direction of the airport on Friday.
A rebel fighter helping a wounded comrade back from the front line told AFP news agency that four tanks had attacked the city "and one has been destroyed so far".
"They took up positions during the night on the airport road and tried to enter the city. We've stopped them at the outer limits, at least for now," he said.
In wester Continued
at April 29, 2011