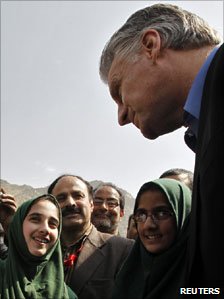 The US Ambassador to India, Timothy Roemer, has announced his resignation, the US embassy says
Ambassador Roemer came to India two years ago and is leaving for "personal, professional and family considerations," a statement said.
Ties between India and the US have grown stronger in recent years.
Last year, US President Barack Obama said the relationship between the two countries will be "one of the defining partnerships of the 21st century."
Ambassador Roemer is expected to leave India in June, the statement said.
"When I accepted this job two years ago, I told President Obama that I would serve for two years but that family considerations would be front and centre after that," Ambassador Roemer was quoted as saying in the news release.
"The US-India relationship - what my friend President Obama calls the defining partnership of the 21st century - has progressed to the global stage," he added.
Ambassador Roemer's resignation comes on the day when the Indian media has been reporting that India has rejected two US companies bidding for a lucrative $10bn deal to buy fighter jets.
Neither the Indian or the US government have confirmed these reports.
at April 28, 2011