Storms and tornadoes kill scores in southern US 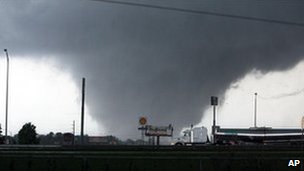 Ferocious tornadoes and storms in the south-eastern United States have killed at least 77 people and left a trail of devastation.
Alabama appears to be worst hit, with 61 people dead. A massive tornado struck the Alabama city of Tuscaloosa, killing 15 people.
Deaths have also been reported in Mississippi, Georgia and Tennessee.
US President Barack Obama has approved emergency aid for Alabama.
The southern weather systems followed fatal storms which careered through Arkansas and a swathe of the central US earlier this week.
The current storm system is forecast to hit North and South Carolina before making its way further north-east.
Governors of Alabama, Arkansas and Tennessee have all declared a state of emergency as a result of the newest round of heavy winds, rains and tornadoes.
President Obama's declaration of a state of emergency for Alabama releases federal aid money.
"While we may not know the extent of the damage for days, we will continue to monitor these severe storms across the country and stand ready to continue to help the people of Alabama and all citizens affected by these storms," Mr Obama said in a statement on Wednesday night.
US media reported a tornado near Andrews Air Force Base in Maryland, just outside Washington DC, on Wednesday evening.Continued
at April 28, 2011