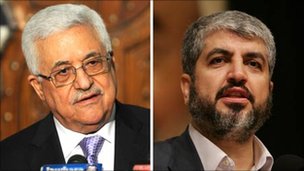 The Fatah party of Palestinian Authority President Mahmoud Abbas and Hamas, which governs Gaza, have agreed a reconciliation deal, officials say.
Under the Egyptian-brokered deal, an interim government will be formed and a date fixed for elections.
The groups have been divided for more than four years, with Hamas in power in Gaza and Fatah running the West Bank.
Israel immediately said that the Palestinian Authority could not have peace with both Hamas and Israel.
Israeli Prime Minister Benjamin Netanyahu said: "I hope the Palestinian Authority will make the right choice - peace with Israel."
Hamas has carried out bombings and rocket attacks against Israel for years and does not recognise its right to exist.
The US responded to the news by saying that any Palestinian unity government would have to renounce violence and recognise Israel.
Thousands of Palestinians protested in Gaza this month, calling for reconciliation.Continued
at April 27, 2011