Waa 1960 kii, Gobalada loo yaqaano Somaliland, xiligii S.Y.L ay Ingariiska la dagaalamaysay, hoos ka Akhri Warbaahinta Foreign Policy
In 1960, British and Italian Somaliland were joined, and Somalia officially gained its independence after centuries of foreign rule. The first elections were held in 1964, with the SYL winning an absolute majority. Somali politics began to flourish, with women taking an active role. Taken from an Associated Press article published in 1966, the photo above shows a pristine main street in Mogadishu. The caption describes Somalia as “perhaps the most democratic country on the dark continent.” A free and fair election has not taken place in Somalia since the 1960s. Four decades later, the country is riveted by despair. 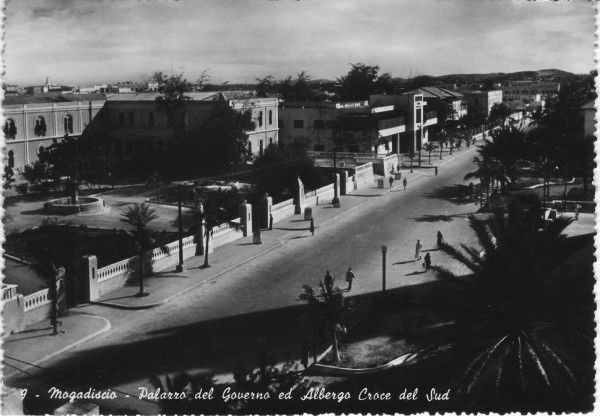 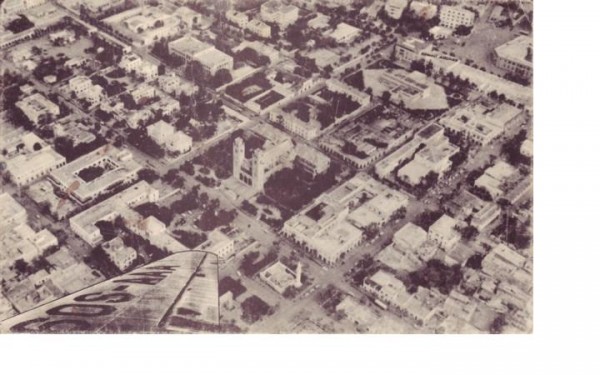 Muuqaalka Garoonka Diyaaradaha Meeshii Somali Airline lagu xarayn jiray 1950, kii, burburtayna 1991.
An aerial view of Mogadishu from a 1950s Somali Airlines postcard (the airline ceased operations in 1991). The cathedral is pictured in the center. Over the years, the cathedral was looted and set afire. But Somalis displaced by conflict now call the ruins of the once great church home. Its doors remain unlocked for squatters who seek shelter inside. 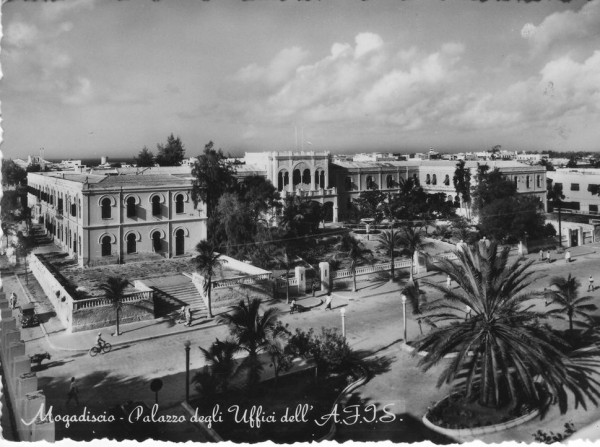 Muuqaalka Wadooyinka Muqdisho 1950, kii, iyo Hoteladii xiligaas ku yaalay, oo Magac Talyaani wata.
This 1950s postcard shows a majestic Mogadishu street shaded by palm trees. The former offices of the Municipality of Mogadishu were housed in the building on the left, and the lavish Croce del Sud Hotel, to its right. 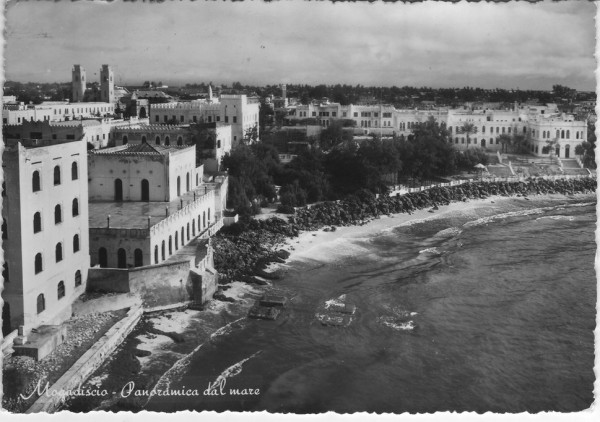 Muuqaalka Xeebta Indian Ocean ee Magaalada Muqdisho 1952,kii
A view of the white city of Mogadishu from the Indian Ocean in 1952. Sydney Oats describes the road into Mogadishu as barren for the first several miles, as the city had been shelled and bombed after the Italians had been driven out. The houses that were still standing were overgrown with grass and weeds. While many European expatriates lived in extravagant Italian-inspired homes, Somalis lived in traditional rectangular houses, often lacking windows.. 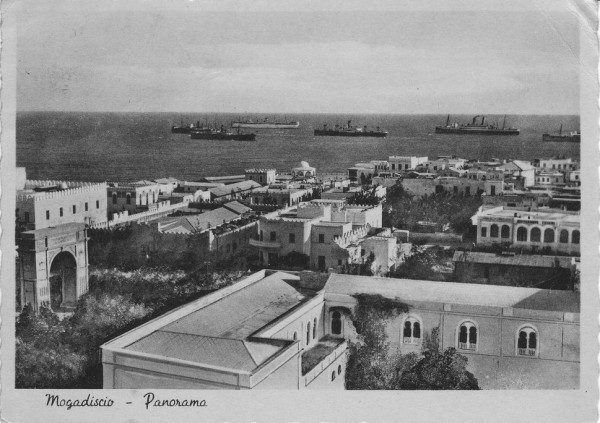 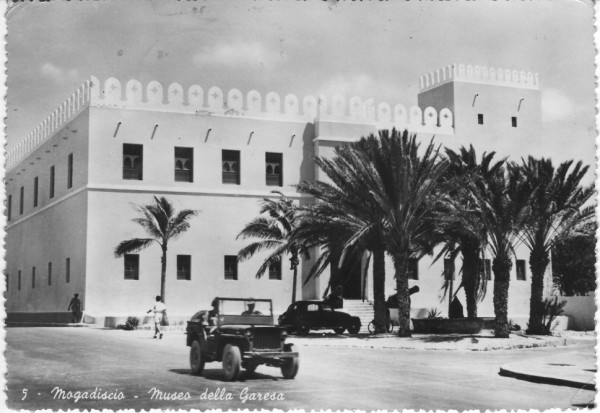 Calanka Ingariiska iyo Talyaaniga inta aan Muqdisho laga taagin, 1948, kii waxaa Wadooyinka Muqdisho daadku mulucyeeyey dhiigga shacabka Muslimka ah ee Soomaliyeed, Adduunyo Taariikh aan Soomali badan ogayn!.
Blood stained the streets of Mogadishu on Jan. 11, 1948 as Somalis protested the possible return of Italian rule to Italian Somaliland, which had been controlled by the British since 1941. One report stated the clash between Italian supporters and the Somali Youth League, Somalia’s first political party, was fueled with “bullets, arrows, broken bottles and knives,” leaving over 50 Italians dead. One year later, as the U.N. General Assembly debated whether to reinstate Italian control, more protests rattled the city. In November of that year, it was decided that Italians would once again hold trusteeship, but only under the pretext that Somalia would gain independence in ten years.
On the left, the British flag is lowered on April 1, 1950, marking the end of British rule. Pictured to the right, the Italian flag is immediately raised. The picture was provided by the military, as Oats and the rest of the Royal Air Force were not allowed to attend the ceremony for their own safety. 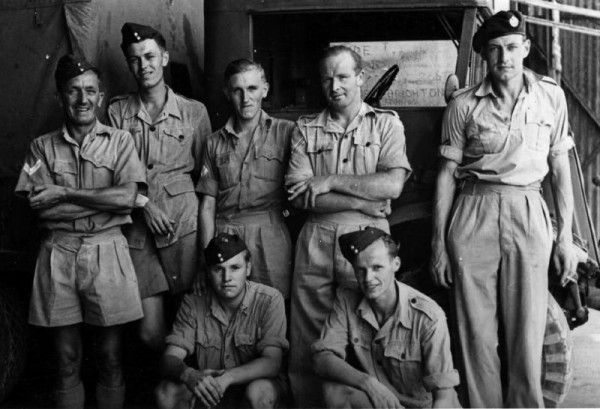 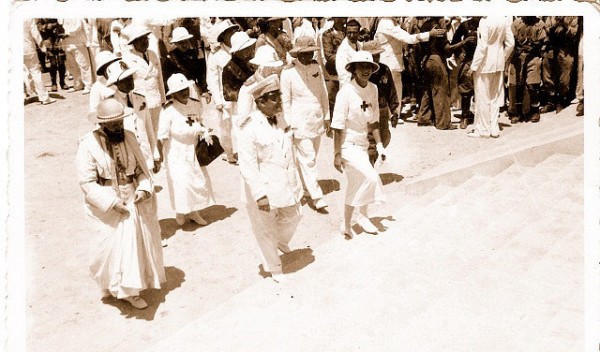 Boqorad katimdi Talyaaniga oo Muqdisho dhex maraysa Bishii March 1936, ayada oo xiran dhar leh calaamada Bisha Cas ama Kiristaana, waxaa dhinac socda Baadariyaal waxay sheeganayaan in ay ku guulaysteen in ay Diinta naga fasahaadiyeen!,.
In March of 1936, the Crown Princess of Italy boarded the hospital ship Cesara. A band played Italy’s national anthem while seaplanes flew above, honoring her departure. As the hospital ship pulled away from its port in Rome, the princess, wearing her Red Cross uniform, is said to have given a Fascist salute to a cheering crowd. On her journey, she worked in military hospitals in Eritrea and Mogadishu. Above, the princess visits a monument in Mogadishu on April 18, 1936. 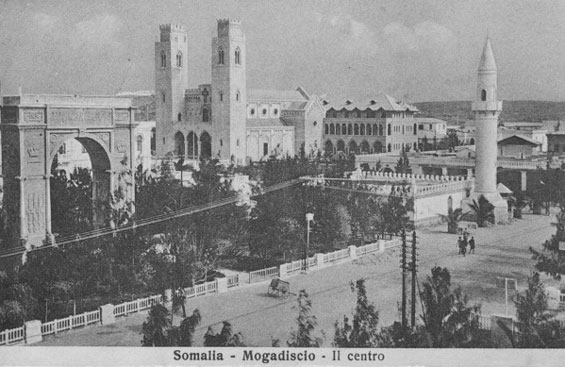 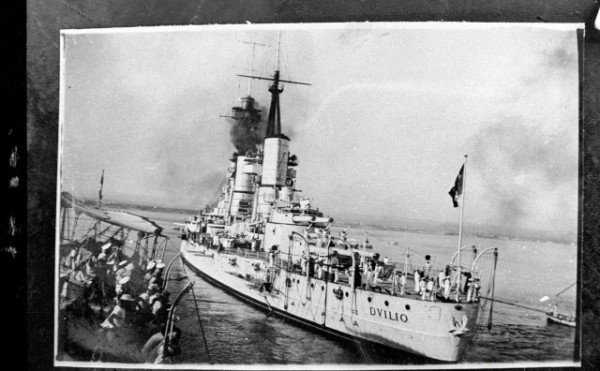 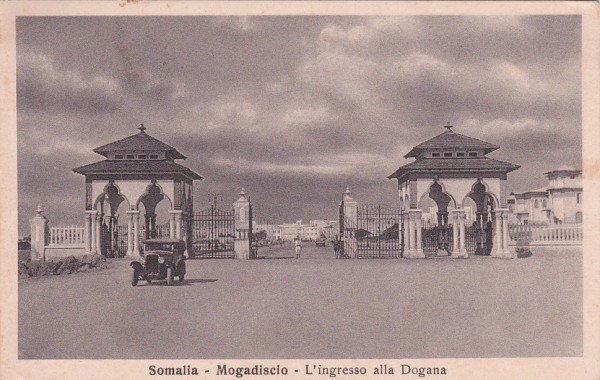 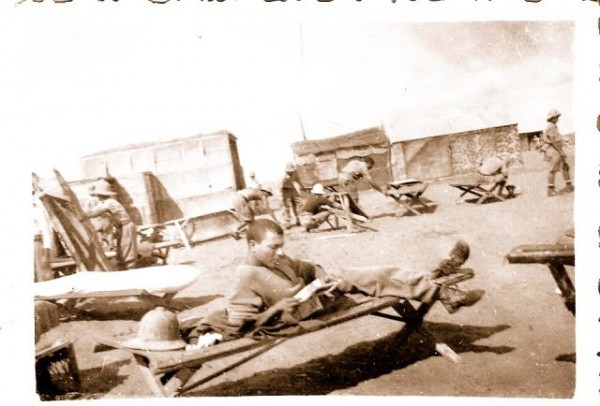 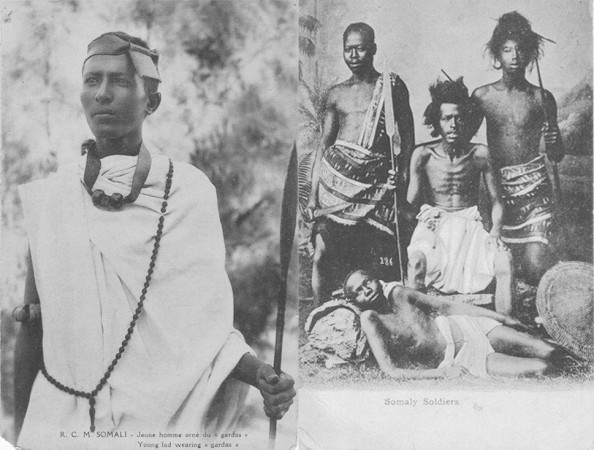 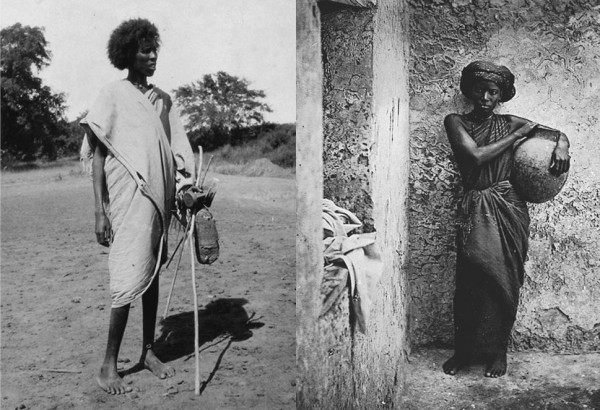 Soomalidii hore Sanadihii, 1880, kii, laga soo gaaro 1900, kii, Gabadha meesha tagaan waa Soomali Baantuu ayey leeyihiin, Wadamada carabta laga keenay oo Soomaliya Talyaaniga jooga laga iibiyey, 1882, dii, waxay noo sheegayaan Asal ahaan Soomali Baantuu in aysan Soomali ahayn, Qarnigii Sagaal Tobnaad ayey ka hadlayaan,
The late 1880s proved disastrous for many African nations, as the European “Scramble for Africa” carved up the continent into 30 separate colonies. By 1900, the European reign stretched across 90 percent of Africa, adding ten million square miles to their sphere of influence.
A Bantu slave woman is pictured on the right, around 1882 in Mogadishu. The Bantu people are not ethnically Somali, as they were captured by Arab slave traders and sold into Somalia throughout the nineteenth century. On the left, a man is dressed in traditional attire, the Italian postcard text on the back reading, Il Nomade. 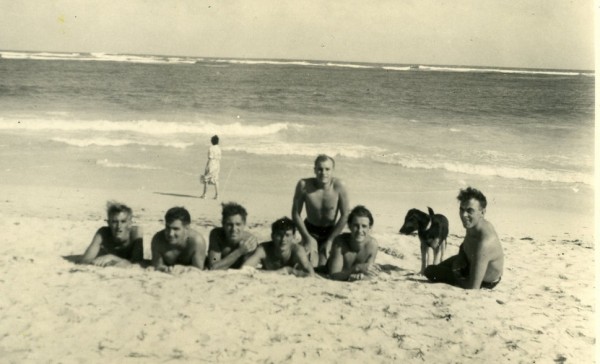 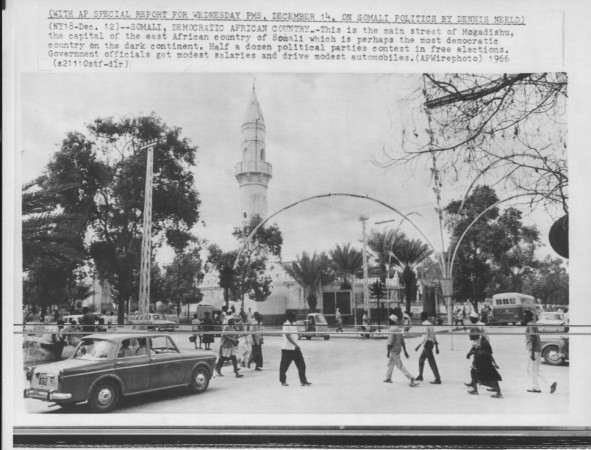 Those photos of Somali warriors are not pictures of any actual Somali dervishes. They're pictures of Afar nomads and perhaps some Bejas. Simply look for images of the Somali Sultans and I can send you a few pictures of them that they had ordered be taken.

The Dervishes were not much loved in Brittain or even Italy. Ask yourself... Would they depict them in a positive light? They called Mohammed Abdullah Hassan the Mad Mullah & a savage yet he managed to fight three empires off for 22 years and erected impressive forts. A savage? I think not. There's even supposed pictures of him that can within a second be proven not to be him as his attire doesn't resemble the attire of his nearby contempraries like many of the Sultans nor does he look anything like any statue of him nor does he dress like what he's clansmen dress like to this day.

There are numerous odd inconsistencies too. You'll see depictions of the Dervishes well covered up, wearing turbans and using rifles as they were confirmed to have utilized and then suddenly you see afro clad spearmen in robes that barely cover them. They were clearly propaganda photos, none of them even depict the dervishes with rifles or the kinds of weapons they were confirmed to have been buying off of their Ottoman allies and why on Earth were the Sultans dressed so different from them? Everybody else in Somali territories wore turbans and very arabized attire and the dervishes were some magical exception? Look for a picture of Kenadid in his Sultan attire, that is probably close to what the Seyyid wore.

Stop using those kinds of pictures, they're clearly not an accurate depiction and what I've noticed about them is that they were never taken in the presence of actual Sultans or Somali leaders. Random colonial soldiers just snapped shots and all the proof we have of their legitimacy is that they simply claim they were Somalis. Google "Afar Nomad" bro... You'll see that they wear what those people are wearing. Somalis don't and if they do only the nomads do not any people in rural settlements, cities or armies.

What a few of the contemporaries of the Dervishes dressed like.

Other depictions of him and his dervishes. Why are they so different to what you're sharing? Alotta this pictures were as I said earlier commisioned by Sultans. Mohamoud Ali Shire and Kenadid allowed those pictures to be taken and they were contemporaries to some extent to the Dervishes. It's assumable that they all dressed very alike. If you're a Somali, don't help in spreading disheartening propaganda.

Afar Nomads...
Look a whole lot like what you were sharing...

Btw... that picture you shared of a SOmali woman isn't a picture of a somali woman: http://en.wikipedia.org/wiki/Slavery_in_Somalia

She was a slave from southeast Africa... No offense intended to anybody but yeah... It's confirmed >_>.

Ignore the part about the Slavery thing... I made a snap judgement and didn't read that you mentioned that she was Bantu. Sorry... 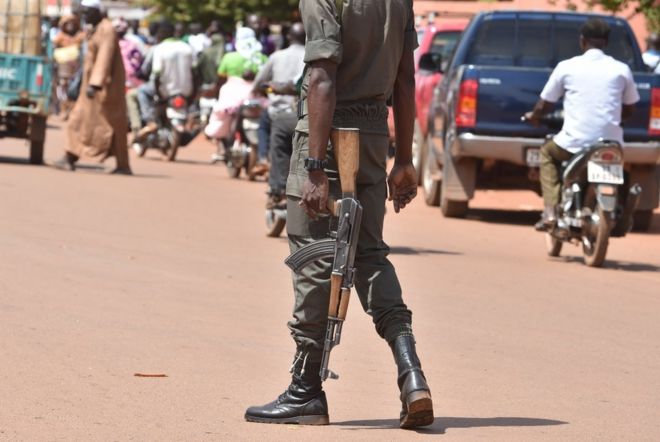