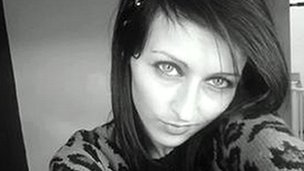 Amelia Arnold, 19, from Stevenage, was last seen on Wednesday
Detectives searching for a woman whose boyfriend is being held on suspicion of her murder have found a body.
Amelia Arnold, 19, disappeared from the home she shared with Jack Wall, 22, and their young daughter in Hadrian's Walk, Stevenage, Hertfordshire, on Wednesday.
Mr Wall was arrested on Sunday morning on suspicion of murder after handing himself into police. He is in custody.
Later, a body was recovered from undergrowth in woods off Travellers Lane, Hatfield, about 10 miles away. 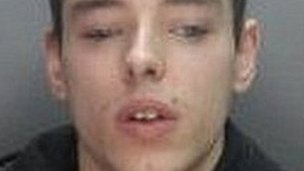 Jack Wall handed himself into police
Formal identification and a post-mortem test are yet to be carried out.
Joseph Potter, 41, from Sycamore Avenue, Bletchley, Buckinghamshire, who was arrested on Saturday in connection with the investigation, has been charged with perverting the course of justice.
A police spokesperson said Miss Arnold's family had been informed and were being supported by specialist officers.
at November 12, 2012