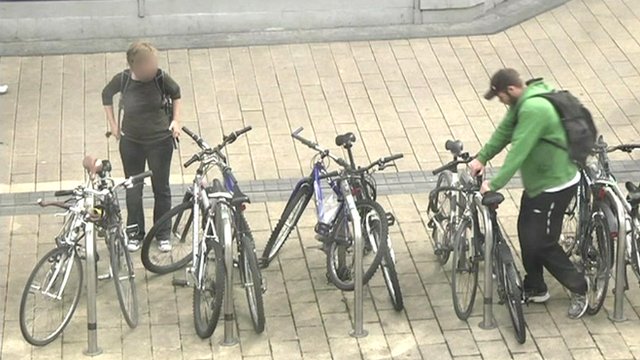 A police force has filmed an officer "stealing" bicycles in full public view to show "just how easy" it is for a thief to get away unchallenged.
PCSO Neil Spiring, of Avon and Somerset Police, used bolt croppers and brute force to 'steal' four bikes.
To further highlight his staged activity the officer at one point dressed in a skeleton outfit.
The force said it wanted to encourage members of the public to call 999 as soon as they saw a crime taking place.
'Have-a-go-hero' 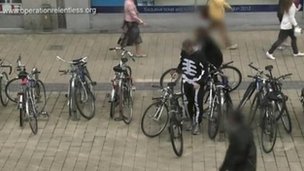 Police say if they are quickly alerted to crime, it is more likely thieves will be caught
It added that on one occasion, more than 50 people walked past and saw the staged crime but nobody called the police.
Insp Keith Rundle said: "We're not suggesting that anyone become a 'have-a-go hero' but we're asking people to call 999 and report bike theft as soon as they see it happening so we can catch the bike thieves in the act.
"We are constantly on the lookout for bike thieves but we also need the community to be vigilant and to call us if they see a crime happening.
"The faster you let us know the more likely we are to be able to catch the thief."
The stunt was conducted as part of Operation Relentless which is being run by the force this autumn.
at November 08, 2012