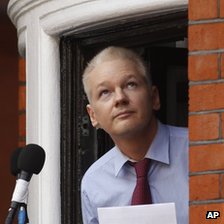 Julian Assange, who is living at the Ecuadorean embassy in London, has a chronic lung infection "which could get worse at any moment", the country's ambassador to the UK has warned.

Ana Alban said the Wikileaks founder, who is fighting UK efforts to send him to Sweden, was suffering from living "in a confined space".

Ecuador previously sought assurances he would not be arrested if hospitalised.

The UK said then it would not prevent "any medical care that he requires".

The Australian, 41, who has taken refuge at the embassy since June, was granted asylum by Ecuador in August.

Mr Assange, who has breached bail conditions by staying there, faces arrest if he leaves.

He is wanted for questioning in Sweden over rape and sexual assault allegations, which he denies, and was arrested in the UK on an extradition warrant.

"Mr Assange, as everyone knows, is in a confined space," Ms Alban said.

"Not only does the embassy have few windows but the city is also dark at this time - we have very little daylight in London.

"He is exposed to any health consequences from this lack of sunlight and lack of fresh air."
Meeting hope
Ms Alban said Mr Assange received visitors after embassy staff finished work.

"We work until at least 05:30 in the afternoon and, afterwards, he meets with certain people who want to visit him for different reasons whether they be activists, supporters, lawyers or friends."

She said Ecuador was "waiting for a meeting" with either UK Foreign Secretary William Hague or UK Home Secretary Theresa May to discuss Mr Assange's future.

Last month, Ecuadorean ministers said Mr Assange had "visibly lost weight" and that his health was "beginning to be jeopardised".

In 2010, two women accused him of committing sexual offences against them while he was in Stockholm to give a lecture.

Mr Assange says the sex was consensual and that he believes the case to be politically motivated.

He says he fears being passed on to authorities in the US if extradited to Sweden.

But Swedish prosecutors have dismissed Mr Assange's claims their case is part of a wider political move to see him stand trial in the US over his work with Wikileaks.
at November 28, 2012