BBC director general Tim Davie vows to 'get a grip'

Acting director general Tim Davie: "My job now is to get a grip of the situation and take action"
Continue reading the main story

Crisis at the BBC

The acting director general of the BBC has vowed to "get a grip" at the corporation following the resignation of George Entwistle over a Newsnight broadcast on child abuse allegations.
Tim Davie said he had set up a "clear line of command" in news.
The director and deputy director of news have been asked to "step aside" pending an internal review into the way claims about Jimmy Savile were handled.
The National Audit Office says it would look at Mr Entwistle's pay-off.
'Justified and necessary'
Mr Entwistle resigned after eight weeks as director general following a Newsnight report which led to former Tory treasurer, Lord McAlpine, being wrongly accused of child abuse in north Wales in the 1980s.
An NAO spokesman confirmed it would be speaking to the BBC Trust - the corporation's governing body - to investigate whether it should conduct a value for money study of the decision to grant him a payout £450,000 - a year's salary.
Continue reading the main story 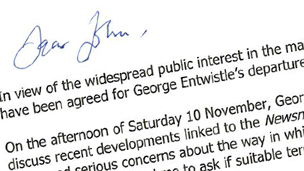 PDF downloadChris Patten's letter to John Whittingdale[313k]
Most computers will open PDF documents automatically, but you may need Adobe Reader
Amid criticism from Downing Street of the pay-off Lord Patten, chairman of the BBC Trust wrote to Commons culture, media and sport committee chairman John Whittingdale, describing the decision as "justified and necessary".
His letter says the sum was what the BBC would have had to pay if the trust had fired Mr Entwistle and that the trust was considering sacking him if he had not volunteered his resignation.
In other developments:
Mr Davie was appointed as acting director general on Saturday after Mr Entwistle announced his resignation.
In his first televised interview since taking the role, Mr Davie said: "If the public are going to get journalism they trust from the BBC I have to be, as director general, very clear on who is running the news operation and ensuring that journalism we put out passes muster.
"The first decision I have made is to get a grip of that, take action and build trust by putting a clear line of command in.
"Separately, we are going to look at the individual process, and there may be disciplinary action. But I want to be fair to people. I don't subscribe to the view that you should act very quickly in that regard and be unreasonable."
He said Mr Entwistle's pay-off was a matter for the BBC Trust. 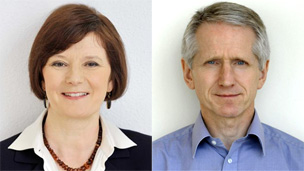 Helen Boaden and Steve Mitchell are senior news executives
Mr Davie told the BBC Radio he he hoped to talk to Lord McAlpine personally about Newsnight broadcast.
Ken MacQuarrie, director of BBC Scotland, was asked to investigate how Newsnight was allowed to broadcast its report and his findings were presented to the acting director general on Sunday.
The BBC said it found that neither director of news Helen Boaden nor her deputy Steve Mitchell "had anything at all to do with the failed Newsnight investigation into Lord McAlpine".
Continue reading the main story

However, they were in the chain of command at the time that Newsnight shelved an earlier investigation into abuse claims against former BBC presenter Jimmy Savile.
They had removed themselves from making decisions on some areas of BBC News output while a separate inquiry, by former head of Sky News Nick Pollard, was held into that decision.
The BBC said once the Pollard Review reports, Ms Boaden and Mr Mitchell "expect to then return to their positions".
Mr MacQuarie said: "To address the lack of clarity around the editorial chain of command, a decision has been taken to re-establish a single management to deal with all output, Savile-related or otherwise."
Meanwhile, MP Chris Bryant said there should be one overall inquiry looking into the child abuse scandal and subsequent BBC row rather than nine separate investigations.
The BBC is also looking into the culture and practices at the corporation during Savile's career and its handling of past sexual harassment claims.
Also, inquiries have been set up by the government to look into the way the original investigation into the abuse in Wales was handled and separate inquiries have been launched by the Department of Health and Director of Public Prosecutions.
at November 12, 2012