Syria could turn into a new Somalia - UN's Brahimi 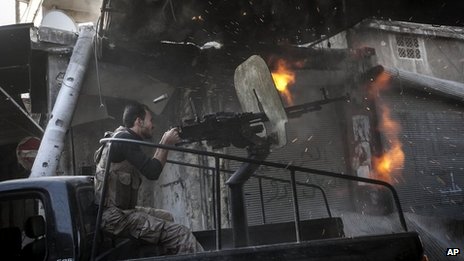 Lakhdar Brahimi said the conflict could "go on for a year, two years and more"
Continue reading the main story

The UN and Arab League envoy to Syria, Lakhdar Brahimi, has said he fears the country could "turn into a new Somalia" unless the crisis does not end soon.
In an interview with the newspaper al-Hayat, Mr Brahimi warned of a scenario in which warlords and militia filled a void left by a collapsed state.
Somalia has been without an effective central government since 1991.
Meanwhile, the UK said it would support offering President Bashar al-Assad a safe exit if it ended the bloodshed.
Prime Minister David Cameron told al-Arabiya TV that the international community should consider anything "to get that man out of the country".
But he also said he would favour Mr Assad "facing the full force of international law and justice for what he has done".
'Difficult and scary truth'
Mr Brahimi, who succeeded Kofi Annan as the international envoy to Syria in August, spoke to al-Hayat a week after the failure of the four-day ceasefire he brokered to coincide with the Islamic holiday of Eid al-Adha.
Continue reading the main story

This type of crisis - if not dealt with correctly day by day - can go on for a year, two years and more”

Lakhdar BrahimiUN envoy to Syria
In the interview, the Algerian diplomat played down the risk of sectarian and ethnic partition - which some observers have suggested could see President Assad's powerful Alawite minority forming a state in Syria's north-east - warning that the country faced something worse.
"People are talking about the risk of partition in Syria. I do not see partition," Mr Brahimi said.
"I believe that if this issue is not dealt with correctly, the danger is 'Somalisation' and not partition - the collapse of the state and the emergence of warlords, militias and fighting groups," he added.
Years of fighting in Somalia between rival clans and warlords, and an inability to deal with famine and disease, have led to the deaths of up to a million people since President Siad Barre was toppled in 1991.
Mr Brahimi said he was seeking a binding resolution from the UN Security Council based on the guidelines for a political transition which were agreed in Geneva in June by the so-called Action Group for Syria.
"Everyone must face a bitter, difficult and scary truth: that this type of crisis - if not dealt with correctly day by day - can go on for a year, two years and more," he said. "I hope that it doesn't go on for this period, and it might not if everyone inside and outside [Syria] does what he should."
Generals 'defect'
On Tuesday, clashes, shelling, explosions and air raids were reported in different parts of Syria.
The Syrian Observatory for Human Rights (SOHR), a UK-based activist group, said seven people had been killed by government air raids in the Houla region of Homs province, and that eight people had died after troops shelled the town of Saraqeb in Idlib province. 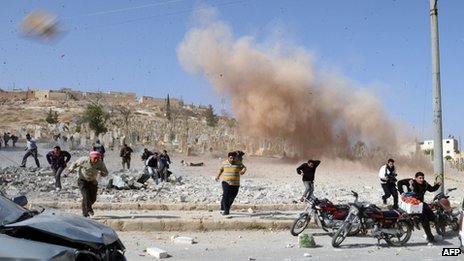 Government warplanes have been bombarding opposition strongholds
Seven civilians were also killed when warplanes bombed the south-eastern Damascus suburb of Kafarbatna, it added.
Later, there was a bomb explosion in the Waroud area of Qudsaya, a north-western suburb of the capital populated mostly by Alawites.
The SOHR said at least 10 civilians had been killed and more than 40 wounded when three devices were detonated. The official Sana news agency said several people had died.
Earlier, Sana said Mohammed Osama Lahm, the brother of the speaker of the People's Assembly, had been shot dead in the Midan district.
The Turkish state-run Anadolu news agency meanwhile said seven Syrian generals had been given refuge after being allowed to cross the border near the town of Reyhanli, in Hatay province.
The generals have reportedly been sent to the nearby Apaydin refugee camp - a well-guarded facility built on farmland which houses other former Syrian army officers. Their identities and ranks were not released.
In Jordan, Russian Foreign Minister Sergei Lavrov held talks with Riad Hijab, a former Syrian prime minister who defected in August.
He urged the opposition to abandon its precondition that the president had to step down before any peace talks can be held.
Mr Hijab later told al-Arabiya that Russia was "searching for a political solution in which Bashar al-Assad stays". This, he said, was "impossible".
at November 06, 2012