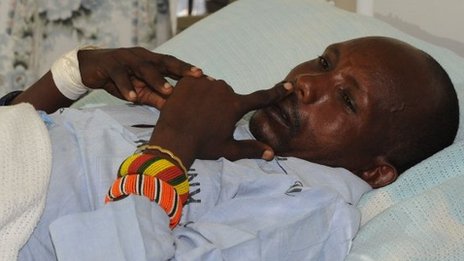 Kenya's military has been ordered to deploy to the north-western Samburu region following a deadly ambush on police officers by cattle rustlers.
At least 42 police officers were killed - the most deadly attack on police in the East African nation's history.
The army will help track down "the bandits" and recover stolen animals and arms, a presidential statement said.
Hundreds of people have been fleeing the remote area fearing revenge attacks, officials and residents say.

A large police team, which included the regular police, reservists and paramilitary officers, was attacked over the weekend near the town of Baragoi in Samburu County's Suguta valley as they attempted to recover stolen cattle.
The attackers used sophisticated weapons such as anti-personnel bombs and rocket-propelled grenades, one local official said.
Kenya's National Security Council, which was chaired by President Mwai Kibaki, ordered the army's deployment and condemned "the heinous act of killing law enforcement officers".
"Everything will be done to ensure the culprits are apprehended and dealt with in accordance with the law," the statement from the president's office said
The council also said it wanted "peace, reconciliation and disarmament exercises" to be carried out in the affected areas.
Warning
Continue reading the main story

The Turkanas are fleeing from Suguta area with their household goods, goats and cattle,”

Peter LegerdedBaragoi shopkeeper
Suguta is a remote valley where people from the Samburu and Turkana communities live in separate villages. They often steal cattle from each other, and clash over grazing rights and access to water points.
On Monday, a religious leader, who did not want to be named, told the BBC that residents in the area feared they may feel the wrath of the security forces, as those behind the killings had disappeared.
"The Turkanas are fleeing from Suguta area with their household goods, goats and cattle," said Peter Legerded, a shopkeeper from Baragoi town, which is outside the valley, told Reuters news agency.
Francis Karimi, a local government official in Baragoi, told AP news agency nearly 1,500 people had fled in buses from Lemerok, a Turkana village in the valley.
Deputy Police Spokesman Charles Owino has warned that in future the police will defend themselves in such circumstances.
"I am sending a very strong warning to the rustlers. It is not going to be business as usual and [they] must be prepared to die because we are not going to allow any police officer to die," Kenya's Daily Nation newspaper quoted him as saying on Wednesday in Nairobi.
at November 15, 2012