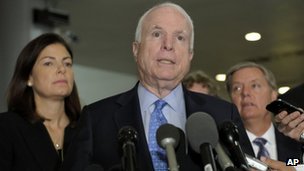 A US diplomat hotly tipped to replace Secretary of State Hillary Clinton has admitted releasing incorrect information after September's attack on the American consulate in Libya.
UN Ambassador Susan Rice said there had been no attempt to mislead the public, but Republicans were unconvinced.
After meeting Ms Rice on Tuesday, senators said they were troubled.
The envoy said her initial line that the Benghazi attack appeared to have sprung from a protest had been wrong.
The 11 September assault on the US consulate triggered a major political row over who knew what and when.
Days afterwards, Ms Rice, 48, said in a series of TV interviews that it seemed to have developed out of protests over an anti-Islamic film.
Later intelligence reports suggested it was possibly tied to al-Qaeda affiliates.
The attack left four Americans dead, including Ambassador Christopher Stevens.
'Disturbed'
On Tuesday, Senators John McCain, Lindsey Graham and Kelly Ayotte met privately with Ms Rice and acting CIA Director Michael Morell to discuss the attack.
Continue reading the main story

John McCainArizona Senator
After the meeting on Capitol Hill, Ms Rice said: "The talking points provided by the intelligence community, and the initial assessment upon which they were based, were incorrect in a key respect: there was no protest or demonstration in Benghazi.
"While we certainly wish that we had had perfect information just days after the terrorist attack, as is often the case the intelligence assessment has evolved."
But the Republicans said questions remained unanswered.
Sen McCain said: "We are significantly troubled by many of the answers that we got and some that we didn't get concerning evidence that was leading up to the attack."
Sen Graham said that he was "more disturbed now than I was before", adding that he would "absolutely" attempt to block any nomination of Ms Rice for secretary of state.
White House Press Secretary Jay Carney said on Tuesday there were "no unanswered questions" about Ms Rice's response to the Benghazi incident, accusing Republicans of being obsessed with it.
Republicans are demanding a joint committee investigate the attack.
Current Secretary of State Clinton is not expected to continue in the role for a second four-year term. The Obama administration would need the support of the Senate for any nomination to the post.
After winning re-election, President Barack Obama vigorously defended Ms Rice, calling Republican criticism of her "outrageous".
at November 27, 2012