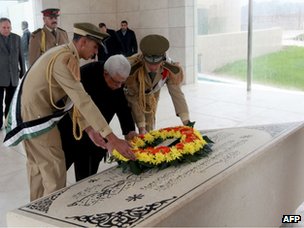 The remains of Yasser Arafat have been exhumed as part of an investigation into how the Palestinian leader died.
Swiss, French and Russian experts were given samples to establish whether his death in Paris in 2004 at the age of 75 was the result of poisoning before the tomb was resealed.
France began a murder inquiry in August after Swiss experts found radioactive polonium-210 on his personal effects.
Arafat's medical records say he had a stroke resulting from a blood disorder.
His widow, Suha, objected to a post-mortem at the time of his death, but asked the Palestinian Authority to permit the exhumation "to reveal the truth".
Sealed tomb
Arafat's body lies in a stone-clad mausoleum inside the Muqataa presidential compound in the West Bank city of Ramallah. The mausoleum was sealed off earlier this month.
Continue reading the main story

Richard GalpinBBC News, Ramallah
The chief Palestinian investigator, Tawfik al-Tirawi, said they had recently asked the Russians to take part in this investigation because they had "an historical relationship" with Moscow.
It seems the Palestinians do not fully trust France and Switzerland when it comes to proving or disproving that their former leader was murdered.
It is not known how long it will take the three countries to complete their tests. But it will be a key moment - and it is possible they will reach different conclusions.
While most Palestinians are certain their leader was murdered, there are serious questions about the validity of testing for polonium poisoning eight years after Mr Arafat's death. The half-life of polonium is less than five months.
Palestinian officials told Agence France Presse that only a Palestinian doctor had been allowed to directly touch the remains and remove the samples, but the process was conducted in front of the Swiss, Russian and French scientists, who will carry out tests for polonium-210 and possibly other lethal substances in their respective countries.
It is believed that the investigation could take several months.
Before the exhumation, the head of the Palestinian committee investigating Arafat's death, Tawfik al-Tirawi, said no journalists would be allowed to observe the exhumation.
"Because [of the] sanctity of the symbol and the sanctity of this event, [the exhumation] should not be permitted to be in front of the media," the former Palestinian intelligence chief said.
A reburial ceremony with full military honours had been planned, but this ultimately was not deemed necessary as the body was not removed from the grave during the collection of the samples.
Many Palestinians continue to believe Arafat was poisoned by Israel, which saw Arafat as an obstacle to peace and had put him under house arrest. Israel has strongly denied any involvement.
There has also been speculation that he was suffering from HIV or cancer at the time of his death.
TV documentary
Arafat, who led the Palestine Liberation Organisation for 35 years and became the first president of the Palestinian Authority in 1996, fell violently ill in October 2004 inside the Muqataa.
Two weeks later he was flown to a French military hospital in Paris, where he died on 11 November.
Continue reading the main story 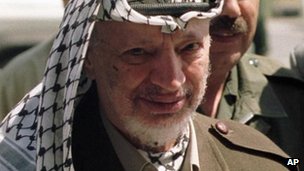 Source: Al-Jazeera TV
In 2005, the New York Times obtained a copy of Arafat's medical records, which it said showed he died of a massive haemorrhagic stroke that resulted from a bleeding disorder caused by an unknown infection.
Independent experts who reviewed the records told the paper that it was highly unlikely that he had been poisoned.
A murder inquiry was launched by French prosecutors in August after an investigation by al-Jazeera TV, working with scientists at the Institute of Radiation Physics (IRA) at the University of Lausanne in Switzerland, found "significant" traces of polonium-210 present in samples taken from Arafat's personal effects, including his trademark keffiyeh headdress.
In some cases, the elevated levels were 10 times higher than those on control subjects, and most of the polonium could not have come from natural sources, the scientists said.
But the institute also said that Arafat's symptoms - as described in his medical records - were not consistent with polonium poisoning.
The former Russian spy Alexander Litvinenko died of exposure to polonium-210 in London in 2006. The UK authorities have accused Andrei Lugovoi, an ex-KGB officer, of poisoning his tea.
at November 27, 2012