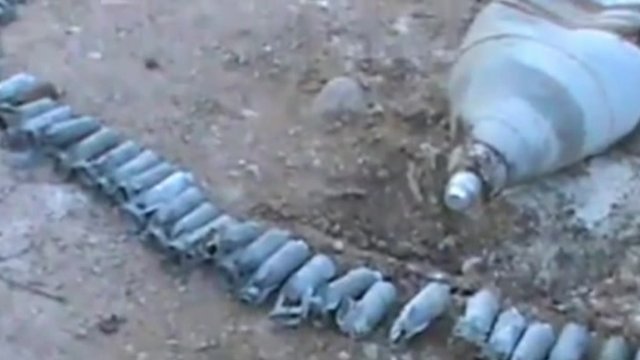 Activists in Syria say a government jet has dropped a cluster bomb on a playground, leaving 10 children dead.
Video posted on the internet showed children's bodies on the ground with their mothers grieving over them.
The children were killed when a MiG fighter bombed a playground in the village of Deir al-Asafir, east of Damascus, opposition activists said.
Intensive fighting has continued around the capital. Rebel fighters captured at least part of an airbase on Sunday.
Further footage of the playground attack showed what appeared to be cluster bomblets on the ground.

In one video, two girls could be seen lying dead in a street while another showed a distraught mother standing, apparently inside a clinic, over her daughter's lifeless body.
In recent months there have been mounting allegations that the Syrian government has resorted to using cluster bombs as the conflict intensifies, although those claims have been denied, the BBC's Jim Muir in neighbouring Lebanon reports.
'Baseless'

Two cluster bombs were dropped on the village, activists said. One man told Reuters news agency that 70 bomblets had been found.
"None of those killed was older than 15 years old," Abu Kassem, an activist in Deir al-Asafir told Reuters.
He said 15 people had been wounded in the attack and denied that rebel fighters were inside the village. They had been operating on the outskirts, he said.
Last month, Human Rights Watch said there had been an increase in online video reports purporting to show evidence of cluster bombs being dropped in the conflict, especially around the town of Maarat al-Numan.
Continue reading the main story

So far, many of those fleeing the civil war have been invisibly absorbed into friends' and relatives' homes. Atma, while distressing enough to witness, is relatively small. But it will probably grow. ”

Paul WoodBBC Middle East correspondent
The Syrian government said the military did not have such weapons and dismissed the allegations as "baseless".
An unverified report by the Local Co-ordination Committees (LCC), an opposition activist network, put the number of casualties across Syria on Sunday at 117, including 14 children.
Activists believe 40,000 people have died since the start of protests against President Bashar al-Assad's rule in March 2011.
The UN refugee agency says the number of Syrians refugees in neighbouring countries either registered or awaiting registration has reached 442,000. Another 2.5 million are described as internally displaced.
Battle for military bases

Rebel fighters said on Sunday they had captured a military airbase at Marj al-Sultan, not far from Deir al-Asafir, although activists of the UK-based Syrian Observatory for Human Rights said they had later pulled out.
Amateur video showed a rebel standing beside a wrecked helicopter while a man speaking on the video said a warplane had been blown up.
Although the rebels control areas to the east and north-east of Damascus as well as on the edge of the city, government forces are widely seen as superior in the capital and the Free Syrian Army has been unable to take permanent control of military bases. 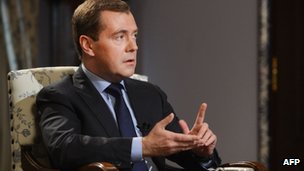 The Russian prime minister said that the recognition of Syria's opposition coalition was 'unacceptable'
A similar rebel attack took place last week on an air defence battalion base at Hajar al-Aswad, south of Damascus, which fighters briefly controlled after a four-day siege.
The rebels have been more successful in holding on to bases in areas of Syria more firmly under their control. Last week opposition sources said they had seized a base at Mayadeen in the eastern province of Deir Ezzor.
They now appear to hold a swathe of territory in the Euphrates valley, from the Iraqi border to the provincial capital of Deir al-Zour.
Unverified videos posted on the internet on Monday showed fighters claiming to be in control of the Tishreen dam on the Euphrates river, further north in Aleppo province. There has been fierce fighting in the area around the dam for several days.
In a separate development, Russian Prime Minister Dmitry Medvedev has criticised a decision by France and the UK to recognise Syria's new opposition coalition as sole legitimate representative of the Syrian people.
"From the point of view of international law, this is absolutely unacceptable," he told French journalists ahead of a two-day visit to Paris, which was starting on Monday.
"A desire to change the political regime of another state by recognising a political force as the sole carrier of sovereignty seems to me to be not completely civilised."
The EU has stopped short of full recognition, describing the National Coalition for Syrian Revolutionary and Opposition Forces as "legitimate representatives of the aspirations of the Syrian people."

How a cluster bomb works

1. Cluster bombs are usually dropped from a plane and can fly several miles before releasing their load of bomblets.
2. The canister starts to spin and opens at an altitude between 1,000m and 100m, spraying the bomblets across a wide area.
3. Each bomblet is the size of a drink can and contains hundreds of metal pieces. When it explodes, it can cause deadly injuries up to 25m away.
at November 26, 2012