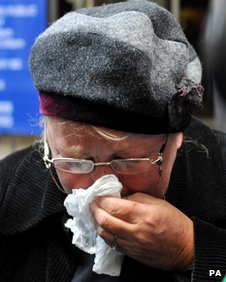 Ex-Labour Luton MP Margaret Moran falsely claimed more than £53,000 in expenses while in office, a jury has ruled.
The 57-year-old was tried in her absence at Southwark Crown Court after she was deemed unfit to stand trial.
She was accused of 15 counts of false accounting and six of using a false instrument over the claims.
The former Luton South MP, who lives in St Denys, Southampton, served in the Commons between 1997 and 2010.
Jurors were unable to return a guilty verdict because of Moran's illness but in a trial of issue, the jury found that she had committed 15 counts of false accounting and six counts of using a false instrument over the claims for parliamentary expenses.
The court had heard that she was able to make a dry rot claim of £22,500 by "flipping" her two homes - changing which property was her second home and therefore allowing her to claim expenses on it.
Largest expenses case
She also changed dates on invoices for the work so that the money would be paid.
One invoice in August 2007 was for £14,805 - apparently for boiler repairs and work on her conservatory in her constituency home in Luton, when it was actually her home in Southampton, the court heard.
Another fake bill for more than £4,000 used an address for a building firm but the property actually belonged to an elderly couple.
Continue reading the main story

Mr Justice Saunders
She also claimed for three bedroom carpets at her one-bedroom Westminster flat, and £2,000 for a landline phone when it did not have one.
James Sturman QC, defending, said the case represented "a very, very unhappy period for British democracy".
Moran's false expenses claims are the largest amount uncovered in the wake of the MPs' expenses scandal, brought to light by the Daily Telegraph in 2009.
Former Labour minister Elliot Morley was jailed last year for dishonestly claiming more than £30,000 in parliamentary expenses.
Mr Justice Saunders is expected to sentence Moran at a future hearing.
She may be subject to a supervision order, a hospital order or absolute discharge, where no further action is taken against her, he said.
"She is presently being treated by psychiatrists at home and that treatment will continue," Mr Justice Saunders said.
Christmas cards claim
Jurors heard that Moran altered addresses to make it look as if she was making legitimate claims for her second home or constituency office, when they were to cover her personal costs.
Moran "abused the scheme", prosecutors said, going as far as to re-submit expenses claims with different descriptions and supportive invoices if they were initially rejected by parliamentary authorities.
The former Luton South MP tried to claim £47 for printing 50 Christmas cards, but was told that greetings cards were not covered by parliamentary expenses, the court heard.
So she submitted a new invoice for the same amount, but this time for "printing services", jurors were told.
The same thing happened with a claim for birthday cards, which were later described as "surgery cards".
Moran submitted a claim for £22,500 for urgent works for dry rot at her Southampton home in August 2008.
Jurors heard, however, that a builder completed the work between September 2007 and March 2008 before the property became Moran's recognised second home in October 2008.
It had previously been listed as her first home after the sudden death of her sister as she became guardian to her two young children, the court heard.
at November 13, 2012