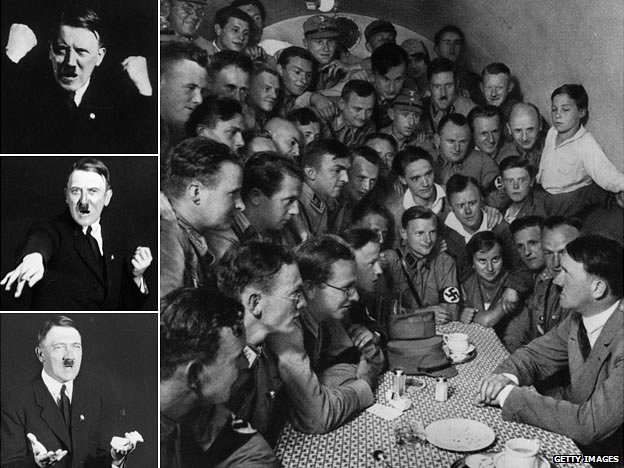 Adolf Hitler was an unlikely leader but he still formed a connection with millions of German people, generating a level of charismatic attraction that was almost without parallel. It is a stark warning for the modern day, says historian Laurence Rees.
At the heart of the story of Adolf Hitler is one gigantic, mysterious question: how was it possible that a character as strange and personally inadequate as Hitler ever gained power in a sophisticated country at the heart of Europe, and was then loved by millions of people?
The answer to this vital question is to be found not just in the historical circumstances of the time - in particular the defeat of Germany in World War I and the depression of the early 1930s - but in the nature of Hitler's leadership.
It's this aspect of the story that makes this history particularly relevant to our lives today.
Continue reading the main story 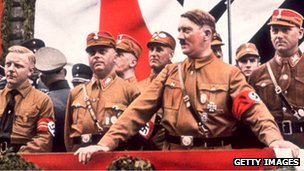 Source: BBC History
Hitler was the archetypal "charismatic leader". He was not a "normal" politician - someone who promises policies like lower taxes and better health care - but a quasi-religious leader who offered almost spiritual goals of redemption and salvation. He was driven forward by a sense of personal destiny he called "providence".
Before WWI he was a nobody, an oddball who could not form intimate relationships, was unable to debate intellectually and was filled with hatred and prejudice.
But when Hitler spoke in the Munich beer halls in the aftermath of Germany's defeat in WWI, suddenly his weaknesses were perceived as strengths.
His hatred chimed with the feelings of thousands of Germans who felt humiliated by the terms of the Versailles treaty and sought a scapegoat for the loss of the war. His inability to debate was taken as strength of character and his refusal to make small talk was considered the mark of a "great man" who lived apart from the crowd.
More than anything, it was the fact that Hitler found that he could make a connection with his audience that was the basis of all his future success. And many called this connection "charisma".
"The man gave off such a charisma that people believed whatever he said," says Emil Klein, who heard Hitler speak in the 1920s.
But Hitler did not "hypnotise" his audience. Not everyone felt this charismatic connection, you had to be predisposed to believe what Hitler was saying to experience it. Many people who heard Hitler speak at this time thought he was an idiot.
"I immediately disliked him because of his scratchy voice," says Herbert Richter, a German veteran of WWI who encountered Hitler in Munich in the early 1920s. 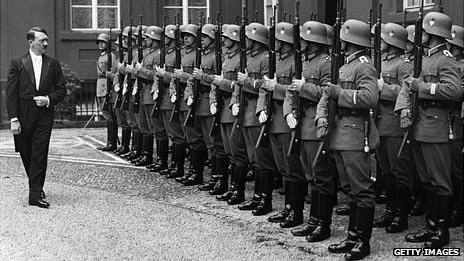 "He shouted out really, really simple political ideas. I thought he wasn't quite normal."
In the good economic times, during the mid-to-late twenties in Germany, Hitler was thought charismatic by only a bunch of fanatics. So much so that in the 1928 election the Nazis polled only 2.6% of the vote.
Yet less than five years later Hitler was chancellor of Germany and leader of the most popular political party in the country.
Continue reading the main story 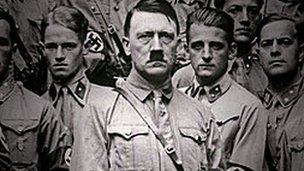 What changed was the economic situation. In the wake of the Wall Street Crash of 1929 there was mass unemployment in Germany and banks crashed.
"The people were really hungry," says Jutta Ruediger, who started to support the Nazis around this time. "It was very, very hard. And in that context, Hitler with his statements seemed to be the bringer of salvation."
She looked at Hitler and suddenly felt a connection with him.
"I myself had the feeling that here was a man who did not think about himself and his own advantage, but solely about the good of the German people."
Hitler told millions of Germans that they were Aryans and therefore "special" and racially "better" people than everyone else, something that helped cement the charismatic connection between leader and led. 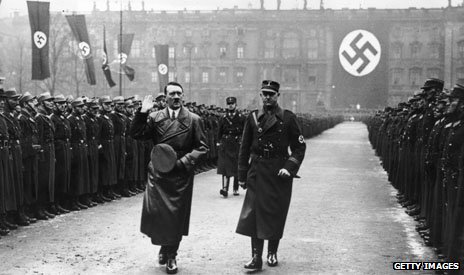 He did not hide his hatred, his contempt for democracy or his belief in the use of violence to further political ends from the electorate. But, crucially, he spoke out only against carefully defined enemies like Communists and Jews.
Since the majority of ordinary Germans were not in these groups, as long as they embraced the new world of Nazism, they were relatively free from persecution - at least until the war started to go badly for the Germans.
Continue reading the main story

Unemployment was 30% in Germany when Hitler took power, it is 25.1% and rising in Greece”

Paul MasonEconomics editor, Newsnight
This history matters to us today. Not because history offers "lessons" - how can it since the past can never repeat itself exactly? But because history can contain warnings.
In an economic crisis millions of people suddenly decided to turn to an unconventional leader they thought had "charisma" because he connected with their fears, hopes and latent desire to blame others for their predicament. And the end result was disastrous for tens of millions of people.
It's bleakly ironic that German Chancellor Angela Merkel was greeted in Athens recently with swastika banners carried by angry Greeks protesting at what they see as German interference in their country.
Ironic because it is in Greece itself - amid terrible economic crisis - that we see the sudden rise of a political movement like the Golden Dawn that glories in its intolerance and desire to persecute minorities.
And it is led by a man who has claimed there were no gas chambers in Auschwitz. Can there be a bigger warning than that?
Laurence Rees is a former creative director of history programmes for the BBC and the author of six books on World War II.
at November 12, 2012