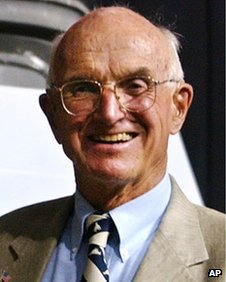 Dr Joseph Murray was a religious man who viewed his work as a "prayer"
Dr Joseph Murray, the surgeon who performed the world's first successful human organ transplant, has died. He was 93.
The Nobel prize winner passed away at the same Boston Hospital where, almost six decades ago, he performed the surgery that would transform medicine.
In December 1954, Dr Murray made history when he transplanted a kidney between identical twins.
He learned his craft during World War II, treating badly burned soldiers.
By performing skin grafts on troops, he realised the biggest obstacle in the procedure was the immune system's rejection of foreign tissue.
Deeply religious
Working at Boston's Peter Bent Brigham Hospital, he and colleagues managed to successfully transplant kidneys on dogs.
Using the new surgical techniques, he took the healthy kidney of 23-year-old Ronald Herrick and transplanted it into his identical twin, Richard, who had kidney failure. Richard lived another eight years.
In 1962, with the arrival of drugs to suppress the immune response, he completed the first successful organ transplant from an unrelated donor.
His work led to hundreds of thousands of transplants in America alone and sparked an ongoing ethical debate.
Dr Murray was a deeply religious man. He told the Harvard University Gazette in 2001: "Work is a prayer. And I start off every morning dedicating it to our Creator."
He passed away on Monday at the facility - now called Brigham and Women's Hospital - where he made medical history.
He had suffered a stroke on Thursday night at his suburban Boston home, hospital spokesman Tom Langford told the Associated Press.
at November 27, 2012