The BBC Beijing bureau interviews Zhu Ruifeng, the investigative journalist credited with exposing a Chinese official in the midst of a sex-tape scandal.

Zhu Ruifeng might be forgiven for seeming overtired or stressed - but he is jubilant, his voice full of energy. 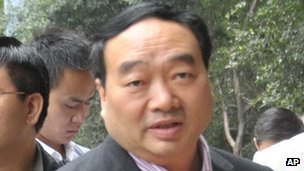 Mr Lei's sacking has been a popular topic on China's microblogs

"I am very happy when I battle corrupt officials," Mr Zhu told the BBC in a phone interview.

Earlier this month, Mr Zhu released a videotape shot in 2007 of a 57-year-old Communist Party local boss having sex with an 18-year-old girl.

Seven days later, the official, Lei Zhengfu, a district-level party secretary from the grimy city of Chongqing, was fired.

"In the past, I was at my happiest when they threatened me and blocked my website," said Mr Zhu.

"Because then I know my reports have attacked their hearts, and my reports are genuine."
Blackmail videos
Mr Zhu has a lot to look forward to. He is preparing to release four more sex tapes, also shot inside hotel rooms, clearly showing Chongqing officials having relations with young girls.


All five videos were recorded as part of a blackmailing scheme by a crooked property developer in Chongqing.

The developer recruited attractive, young women between the ages of 18 and 20, paying them 300 yuan ($48, £30) each time the girls secretly recorded themselves having sex with prominent Chongqing officials.

If the girls failed to get a clear view of the officials' faces on camera, they would be forced to record more sex acts until the developer had the material he needed to blackmail the city's bigwigs into giving him better deals.

The honeytrap scheme went belly-up when Lei Zhengfu, star of the first sex video, appealed to the Chongqing police for help.

The city's then-police chief, Wang Lijun, came to Mr Lei's rescue, raiding the developer's home and confiscating the videos. The property developer was jailed for a year and the young women were each detained for a month.

This year, Wang Lijun later starred in his own, separate corruption scandal, after offering US diplomats information on the Chongqing murder of British businessman Neil Heywood.

Gu Kailai, the wife of the city's disgraced former party chief, Bo Xilai, was later convicted of that murder. Wang's related misdeeds landed him 15 years in prison.
'Real journalist'
Throughout that time, the developer's secret sex tapes sat in a police vault until early November, when a mystery figure inside the Chongqing police force leaked them to Mr Zhu. 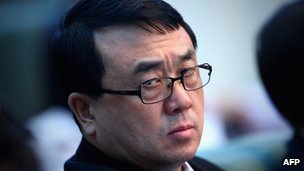 "My source told me the developers will only target officials who have real power over construction projects. They needed to invest money and time to train these pretty girls."

Still, Mr Zhu says he wants to be absolutely sure of the identities of the people in the videos before releasing them.

"If you go ahead and spread things that could be fabricated, asking the public to check whether they are real or not, then you are not a real journalist," he said.

It is possible the Communist Party's own anti-corruption team will beat Mr Zhu to the punch, releasing information about the tapes on their own.

Chongqing's Disciplinary Committee seized the videos a long time ago, Mr Zhu recently learned, but they were reluctant to make waves inside the Communist Party by punishing any of the officials involved.

Now that the first video has been splashed all over the internet, Mr Zhu thinks the committee has no choice but to conduct an open investigation pointed at the four remaining officials.

"Some people think the Party's attempt to deal with its own corruption problems is like beating your right arm with your left arm," Mr Zhu said.

"In our system, anti-corruption measures have to involve the participation of the people. You cannot do it behind closed-doors using illegal procedures."
'Changing' sky
Originally from Henan province, Zhu Ruifeng now lives with his family in Beijing, mostly working alone on his anti-corruption website, Supervision by the People. 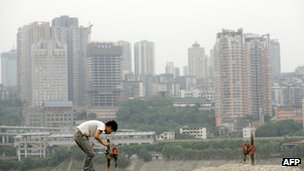 Starting in 2000, he worked as a print journalist, filing stories for Fang Yuan, a state-run magazine sponsored by the People's Supreme Court.

But in 2006, Mr Zhu struck out on his own, realising he would be more content to publish his own scoops.

Well before the Chongqing sex scandal, Mr Zhu's site registered some big wins. In 2007, he posted articles highlighting problems with the administration of vaccines in China's central Shanxi province.

Slowly, other Chinese media outlets picked up on the story, linking the vaccines to deaths and illnesses in children living in the northern part of the province.

In 2010, the country's Health Ministry released the results of its own investigation, disputing multiple reports that improperly stored vaccinations had resulted in adverse reactions in children.

However, the investigation uncovered some irregularities in the way in which vaccines were labelled in the province, and one Shanxi health official was also caught embezzling 270,000 yuan from the vaccine supplier.

Other Chinese media outlets picked up on the story and six months later, China's Health Ministry confirmed that three children had been made sick by vaccines in Shanxi.

The Chinese government has refused to blame the vaccines for the other children's deaths and illnesses.

Since then, Mr Zhu's site has also exposed corrupt officials in Liaoning and Shanxi provinces, resulting in at least two firings.

In each of those scandals, Mr Zhu received anonymous threats and his website was temporarily blocked.

During this sex tape scandal, though, his site has been left untouched.

Mr Zhu believes that it is a sign that China's new government, led by Xi Jinping, might be different from their predecessors.

"Maybe our new generation of leaders is really determined to fight corruption," he said. "Maybe the sky is really changing."
at November 28, 2012