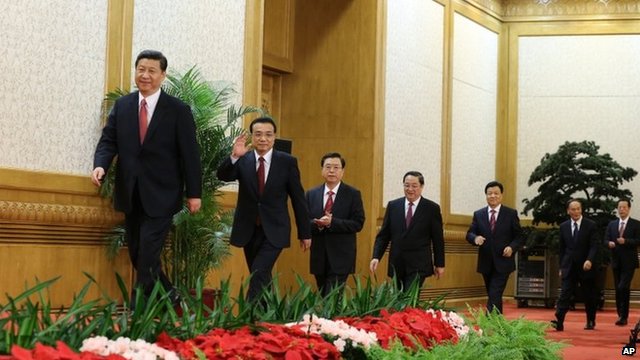 Xi Jinping has been confirmed as the man to lead China for the next decade.
Mr Xi led the new Politburo Standing Committee onto the stage at the Great Hall of the People in Beijing, signalling his elevation to the top of China's ruling Communist Party.
The party faced great challenges but would work to meet "expectations of both history and the people", he said.
Most of the new committee are seen as politically conservative, and perceived reformers did not get promotion.
Xi Jinping replaces Hu Jintao, under whose administration China has seen a decade of extraordinary growth.
The move marks the official passing of power from one generation to the next.
'Pressing problems'
Continue reading the main story

Raymond LiBBC Chinese
The new faces contain no surprises - as all of them are from the list of favourite names widely mentioned by the media.
The new line-up shows that 86-year old former leader Jiang Zemin still has important influence, because at least four out of seven new members are widely seen as his allies.
Meanwhile the outgoing leader Hu Jintao's three allies - Li Yuanchao, Liu Yuandong and Wang Yang - did not make it into the Standing Committee.
Mr Hu has also given up his post as the chairman of the Central Military Commission, indicating he will fully retire from his political posts and stay away from political life too.
The prospect of political reform now looks more unlikely as most of the new leaders are regarded as political conservatives.
Mr Xi was followed out onto the stage by Li Keqiang, the man set to succeed Premier Wen Jiabao, and five other men - meaning that the size of the all-powerful Standing Committee had been reduced from nine to seven.
Those five, in order of seniority, were Vice-Premier Zhang Dejiang, Shanghai party boss Yu Zhengsheng, propaganda chief Liu Yunshan, Vice-Premier Wang Qishan and Tianjin party boss Zhang Gaoli.
The new leaders had great responsibilities, Mr Xi said, but their mission was to be united, and to lead the party and the people to make the Chinese nation stronger and more powerful.
"The people's desire for a better life is what we shall fight for," he said.
Corruption had to be addressed, he said, and better party discipline was needed.
"The party faces many severe challenges, and there are also many pressing problems within the party that need to be resolved, particularly corruption, being divorced from the people, going through formalities and bureaucratism caused by some party officials," Mr Xi said.
"We must make every effort to solve these problems. The whole party must stay on full alert."
'Confidence in continuity'
The new Standing Committee was endorsed in a vote early on Thursday by the new party Central Committee, but in reality the decisions had been made in advance.
The new leaders will gradually take over in the next few months, with Hu Jintao's presidency formally coming to an end at the annual parliament session in March 2013.
Mr Xi has also been named chairman of the Central Military Commission, a Xinhua news agency report said, ending uncertainty over whether that post would be transferred from Hu Jintao immediately.
Continue reading the main story

Mr Hu's predecessor, Jiang Zemin, held on to the post for two years after he stood down from the party leadership.
New Standing Committee member Wang Qishan has also been named head of the Central Commission for Discipline Inspection - the party's anti-corruption watchdog.
Mr Xi, a former Shanghai party chief, was appointed to the politburo in 2007.
A "princeling" - a relative of one of China's revolutionary elders - he has spent almost four decades in the Communist Party, serving in top posts in both Fujian and Zhejiang provinces, as well as Shanghai.
His speech drew praise online, with a number of netizens liking his more informal style.
"This big boss at least is talking like a human being. I won't comment on the rest," well-known Chinese journalist Gong Xiaoyue said via micro-blog.
Mr Xi, 59, is said to be a protégé of Jiang Zemin, while Li Keqiang is said to have been Mr Hu's preferred successor.
Mr Hu has been the Communist Party chief since he led the Standing Committee line-up out on stage in November 2002.
Under his administration China has seen a decade of rapid development, overtaking Japan as the world's second-largest economy.
But the development has been uneven, leading to a widening wealth gap, environmental challenges and rumbling social discontent over inequality and corruption.
Continue reading the main story

Analysts say there has been division at the very top of the leadership in the lead-up to the party congress, with two rival factions jostling for position and influence.
The transition process has also been complicated by the scandal that engulfed Chongqing party leader Bo Xilai - a powerful high-flier once seen as a strong contender for the top leadership. His wife has been jailed for murdering a British businessman and he looks set to face trial on a raft of corruption-related charges.
That notwithstanding, the power transition process has been orderly, for only the second time in 60 years of Communist Party rule.
"The ostensible lack of drama throughout the week-long session may disappoint sensation seekers," China Daily said in an editorial on Thursday before the new Standing Committee line-up was announced.
"But the confidence in continuity, instead of revolutionary ideas and dramatic approaches, means a better tomorrow is attainable."
Your comments (65)
at November 15, 2012