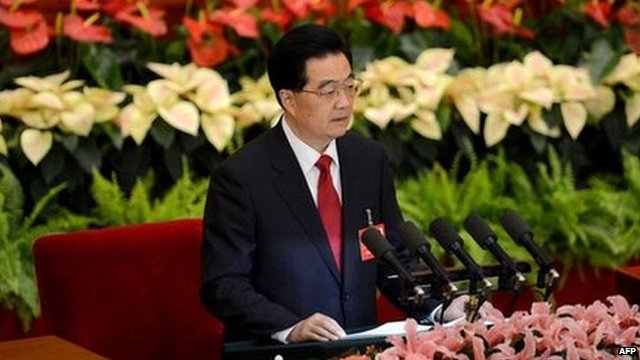 Chinese President Hu Jintao has opened a Communist Party congress that begins a once-in-a-decade power transfer with a stark warning on corruption.
Addressing more than 2,000 delegates, Mr Hu said that a failure to tackle the issue "could prove fatal to the party".
China faced unprecedented opportunities and challenges, he said, and the nation should "aim higher and work harder".
His speech kicks off a week-long meeting that will see a new set of leaders unveiled.
Continue reading the main story

Security is very tight across Beijing, with many dissidents detained or under house arrest, rights groups say.
Mr Hu told delegates at the Great Hall of the People that China had to adapt to a changing domestic and global environment.
"We must aim higher and work harder and continue to pursue development in a scientific way, promote social harmony and improve the people's lives," he said.
China's development should be made more balanced and sustainable, he said, and the "serious challenge" of corruption should be addressed.
"If we fail to handle this issue well, it could prove fatal to the party, and even cause the collapse of the party and the fall of the state," he said.
Anyone who broke the law would be brought to justice, "whoever they are and whatever power or official positions they have", he said.
The corruption warning echoed one delivered 10 years ago during the previous leadership transition, when the party was told it risked "heading for self-destruction" if it did not tackle the issue.
The months leading up to this congress have seen China's political leadership rocked by a scandal involving Bo Xilai, the former Chongqing party leader once seen as a candidate for top office.
His wife has been jailed for murdering a British businessman and he is expected to face trial on corruption-related charges.
Continue reading the main story

Kerry BrownProfessor of Chinese politics, University of Sydney
All the standard slogans we have become familiar with during the Hu Jintao period got an airing in his speech. "Peaceful development", "creating a beautiful China", "firmly marching on the path of socialism with Chinese characteristics".
There was the familiar stress on needing to have stability and security in society, and to support the military, nurture good relations with Taiwan across the Strait and, perhaps with a little more force than it would have usually been given in view of the Bo Xilai events, a section on the need to do something about corruption.
All it really tells us is that, till the last, Hu Jintao has been a man of immense political and personal self-control. His legacy will be consensus-led, collective leadership in an age in which Chinese society was undergoing fast, profound and disorientating changes.
Across China, meanwhile, recent cases of official corruption have stoked public anger and there have been a series of high-profile mass protests focusing on land grabs and environmental issues.
On the internet, thousands of people have called for better measures to fight corruption, leaving comments on websites launched for the congress by official media outlets Xinhua news agency, People's Daily and China Central Television (CCTV).
Economic growth has also slowed in recent months and the wealth gap is an issue of great concern, as is China's ageing population.
Mr Hu said a new model for economic growth was needed to respond to domestic and global changes.
"On the basis of making China's development much more balanced, coordinated and sustainable, we should double its 2010 GDP and per capita income for both urban and rural residents (by 2020)," he said.
Amid rumbling regional tensions over territorial rows in the East China and South China Sea, Mr Hu said the nation should "resolutely safeguard" maritime rights and become a maritime power.
"Active and prudent efforts" should be made to reform the political structure, he said, without giving details.
'Growing concerns'
The congress - for which no formal schedule has been revealed - will last a week and will be keenly observed for any indications of the leadership's future plans.
During the congress a new central committee is selected. It then chooses the country's highest decision-making body, the Standing Committee of the Politburo.
The process takes place behind closed doors, with the make-up of the top bodies in reality decided ahead of time.
Continue reading the main story

The current Standing Committee has nine members, of whom seven including Mr Hu and Premier Wen Jiabao are expected to step down.
The other two members, Xi Jinping and Li Keqiang, are expected to become party leader and deputy respectively. Mr Xi is also expected to take over from Mr Hu as China's president in March 2013.
Ahead of the congress there has been speculation that the number of seats on the committee will be reduced from nine to seven.
Analysts say there has also been division at the very top of the leadership, with two rival factions jostling for position and influence.
Vice-Premier Wang Qishan, propaganda chief Liu Yunshan, party organisation chief Li Yuanchao and Vice-Premier Zhang Dejiang are thought to be the front-runners.
But the exact composition of the committee will not be clear until it is formally announced next week, likely on 15 November at a plenum expected to follow the congress.
In Beijing, more than 1.4 million volunteers have been brought in to help out with security for the congress.
Transport restrictions are in place, street vendors have been told to close and even the flying of kites has reportedly been banned.
Rights group Amnesty International says more than 130 political dissidents were unlawfully detained or placed under house arrest ahead of the meeting.

Are you in China, or are you Chinese living abroad? How do you feel about the leadership change? You can get in touch using the form below:
at November 08, 2012