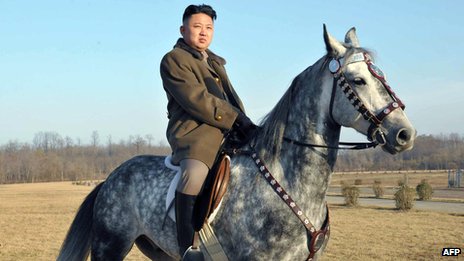 This photo of Kim Jong-un, recently released by North Korean state media, is one of the images that appears in the People's Daily spread
Continue reading the main story

The online version of the Chinese Communist Party's official newspaper appears to have fallen for a spoof by the US satirical website, The Onion.
The People's Daily ran a 55-page photo spread of North Korean leader Kim Jong-un after he was declared The Onion's Sexiest Man Alive for 2012.
He is shown riding horses, holding children and greeting his troops.
The spread is accompanied by tongue-in-cheek quotes from The Onion about the "Pyongyang-born heart-throb".
"With his devastatingly handsome, round face, his boyish charm, and his strong, sturdy frame, this Pyongyang-born heart-throb is every woman's dream come true," the People's Daily quoted The Onion as saying.
"Blessed with an air of power that masks an unmistakable cute, cuddly side, Kim made this newspaper's editorial board swoon with his impeccable fashion sense, chic short hairstyle and, of course, that famous smile."
"I wouldn't say I'm surprised," Onion editor Will Tracy told the BBC, responding to the People's Daily feature.
"I mean, this kind of thing has happened in different forms before, so it never totally takes us by surprise, although it's a total delight whenever it does happen."
The Onion, which ran its Sexiest Man Alive piece earlier in the month, had an update to its article on Tuesday.
"For more coverage," it wrote," please visit our friends at the People's Daily in China, a proud Communist subsidiary of The Onion, Inc. Exemplary reportage, comrades."
By around midday on Wednesday the People's Daily spread appeared to have been removed, with the link to the English version returning an error message.
The Onion said previous winners of its Sexiest Man Alive prize included Syrian President Bashar al-Assad and US financial swindler Bernard Madoff, who is currently serving a 150-year prison sentence.
Two months ago, Iran's semi-official Fars news agency was forced to apologise after being taken in by a spoof news item from The Onion which declared rural Americans preferred Iranian President Mahmoud Ahmadinejad to US President Barack Obama.
It quoted one fictional West Virginian resident as saying he would rather go to a baseball game with Mr Ahmadinejad because "he takes national defence seriously".
at November 28, 2012