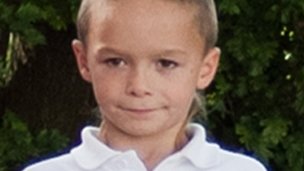 An eight-year-old boy died after falling into a fast flowing river while playing with friends, an inquest heard.
Ian Bell grabbed a branch after falling into the River Wear in County Durham when it was in spate in April, but the branch snapped and he was washed away.
The County Durham Coroner, Andrew Tweddle, returned a verdict of accidental death.
Pathologist Dr Paul Barrett told the inquest that the cause of death was "immersion in water".
He explained that it was different from drowning, in that the shock of the cold or panic could have led to Ian's death.
Ch Supt Andy Reddick from Durham Police, who led the police operation to find Ian, said officers were alerted 50 minutes after the boy fell in.
Major search
He was playing with two friends in a fast-flowing stream close to where it met the River Wear when he slipped and was quickly pulled into the main river.
A major search was started that evening, involving family and friends, police officers, five fire crews and three helicopters.
In the coming days, search specialists checked the 25 miles of the Wear to the sea at Sunderland.
His body was found by William Thompson, a member of the public with 30 years' diving experience, in a slow-moving section of the river at Page Bank, on 6 May.
The coroner was told there was no third party involvement in Ian falling in to the river.
The coroner said: "I think considerable thanks should be given to all the people involved, the professionals as well as the lay volunteers."
Ian's family, however, felt the police operation was inadequate.
at November 12, 2012