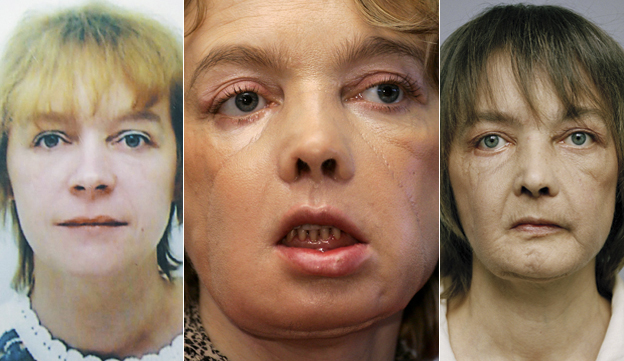 Isabelle Dinoire before her injuries, just after the operation, and in 2009
Continue reading the main story

Seven years ago Isabelle Dinoire, became the first-ever person to have a face transplant. In a rare interview, she describes how she copes with the stares, and her yearning to meet the family of the woman whose face became her own.
"The most difficult thing is to find myself again, as the person I was, with the face I had before the accident. But I know that's not possible," says the 45-year-old mother of two from northern France.
"When I look in the mirror, I see a mixture of the two [of us]. The donor is always with me."
After a moment, she adds: "She saved my life."
Dinoire regularly turns down media requests and rarely agrees to be photographed. She comes across as relaxed and self-assured, but her traumatic ordeal has left its mark, physically and mentally.
She still has a visible scar running from above her nose to down under her chin where specialist doctors at Amiens University Hospital in northern France, spent 15 hours sewing the donor's face on to hers. One of her eyes is slightly drooping.
Continue reading the main story

If people stare at me insistently, I don't care any more, I just stare back”

Speaking with a slight impediment - and with almost alarming simplicity - she recounts how, in a fit of depression in May 2005, she took an overdose of sleeping pills in an attempt to end her life.
She awoke to find herself at home, lying beside a pool of blood, with her pet Labrador at her side. The dog had apparently found her unconscious, and desperate to rouse her, had gnawed away at her face.
"I couldn't even begin to imagine it was my face or my blood - or that the dog had chewed my face," she says.
The injuries to her mouth, nose and chin were so extreme that doctors immediately ruled out a routine face reconstruction. Instead they proposed a ground-breaking face transplant.
Continue reading the main story 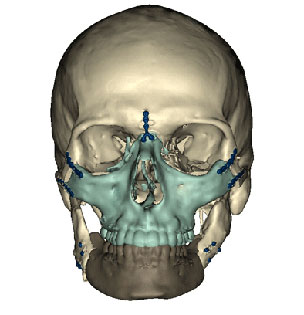 "From the first time I saw myself in the mirror after the operation I knew it was a victory. It didn't look that good because of all the bandages, but I had a nose, I had a mouth - it was fantastic," she says. "I could see in the eyes of the nurses that it was a success."
Unable to speak properly due to a tracheotomy done for the operation, all she could murmur was a simple, "Thank you."
Dinoire's delight at her new face, however, quickly turned sour. She was completely unprepared for the attention her case brought her.
Pursued by the media, harassed by passers-by and curious onlookers, Dinoire spent months after the operation hidden away at home, not daring to venture out.
"It was excruciating. I live in a small town and so everyone knew my story. It wasn't easy at the beginning. Children would laugh at me and everyone would say, 'Look it's her, it's her.'" She felt like "a circus animal".
Nowadays, people still recognise her around town, but the attention is "not as brutal" as before, she says.
"With time I have got used to my own face. This is what I look like, what I am like, who I am. If people stare at me insistently, I don't care any more, I just stare back!" she says, with a hint of a smile.
Continue reading the main story

But has her personality changed as well as her outward appearance? "No" she replies quickly, "I am the same, just with a different face."
According to Prof Sylvie Testelin, one of the team that operated on Dinoire in Amiens, not every patient with severe facial injuries can be offered the chance of a transplant.
In 2005 no-one was really sure of the long-term effects on patients of taking a cocktail of drugs for the rest of their lives to prevent their body rejecting the new tissue.
But in the case of Dinoire - and the two other people in France who have had successful transplants since then - the benefits have far outweighed the risks.
Continue reading the main story

"Nobody can imagine what it's like to live without a face. She [Isabelle] can. But we must be sure it is right for the patient," says Testelin.
Worldwide there have been a dozen or so successful operations - in the US, Spain, Turkey and China. "You cannot imagine the number of people who have wanted transplants, but it's not a game or a race to do more and more," she says.
One day Dinoire will have to face up to the possibility of a major rejection by her body, says Testelin. As her doctor, she too has to be prepared for this - though she hopes that day never comes.
Continue reading the main story

Dinoire is more sanguine about her future. "I tell myself it will be all right. If I take my drugs everything should go well," she says.
She spends her days visiting a few close friends and walking her new pet dog - she was devastated that the Labrador she had in 2005 was put down.
Still prone to bouts of depression, she says she constantly thinks about the dead woman whose face she was given. Right after the operation she would surf the internet in search of details of the anonymous donor - whose identity French law will never allow her to know.
"When I feel down, or depressed, I look at myself in the mirror again and think of her. And I tell myself, I'm not allowed to give up. She gives me hope."
One day Dinoire would even like to be able to meet the woman's family, to thank them for what she describes as their "magical donation".
at November 27, 2012