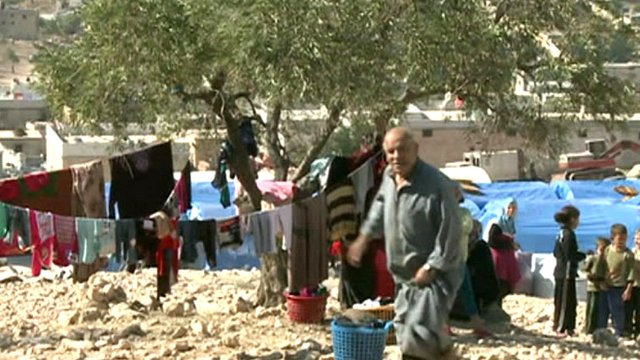 Rabab Al Rifai, of the International Committee of the Red Cross in Syria: ''Humanitarian needs are on the rise''
Continue reading the main story

The Red Cross has said it "can't cope" with the worsening situation in Syria.
"The humanitarian situation is getting worse despite the scope of the operation increasing," said Peter Maurer, president of the International Committee of the Red Cross (ICRC).
Meanwhile, President Assad has told Russian TV that he will not leave Syria as suggested by the UK prime minister.
It comes as Syria's divided opposition groups meet in Doha to discuss uniting under a new leadership body.
"I am not a puppet made by the West to go to the West or to another country. I am Syrian... I must live and die in Syria," Mr Assad said, in remarks published on the website of the Russia Today TV channel. 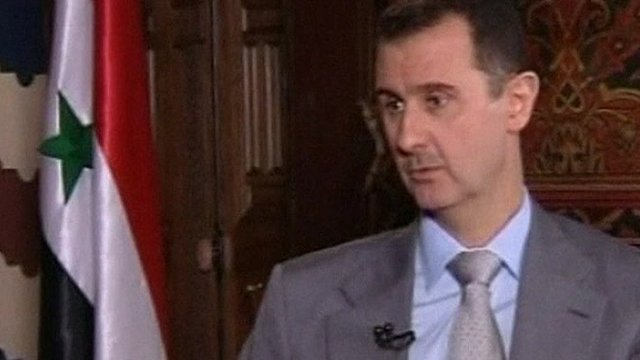 Bashar al-Assad: "I am a Syrian. My home is in Syria"
"If there are problems in Syria - especially as we are the last bulwark of secularism, stability and coexistence in the region - then the domino effect of that would stretch from the Atlantic to the Pacific," he said.
"I don't think the West is going in this direction, but if they did, nobody can tell what would happen next."
Blank spots
Mr Maurer said the conflict was causing more casualties and making it difficult for the ICRC to reach victims.
There are currently "a lot of blank spots" and an unknown number of people were not getting access to the aid they needed, Mr Maurer added.
The ICRC has not been able to get to certain parts of the country, he added, giving as an example the city of Aleppo, which has been badly hit by violence in recent months.
Its personnel were able to access some districts of the flashpoint city of Homs last week, which Mr Maurer said was a major success.
The constantly moving nature of the conflict meant the Red Cross could not plan but instead had to seize opportunities for aid delivery on a day-to-day basis, Mr Maurer said.
His comments come a day before UN diplomats and aid agencies are due discuss the issue of access to Syria at a meeting in Geneva.
On Wednesday, a Syrian medical group claimed that up to 95% of foreign medical aid supplies were being diverted into the hands of government forces - a claim that that the ICRC says is so far unsubstantiated, the BBC's Imogen Foulkes in Geneva reports.
Strong pressure
The meeting of Syrian opposition groups on Thursday is set to bring together leaders of the Syrian National Council, hitherto the main opposition group, with other Syrian opposition elements.
Continue reading the main story

Jim MuirBBC News, Doha
The SNC is wary of signing up as a minority element in a new leadership that might sideline or even destroy it, without clear guarantees that the new body will be given the kind of support needed to tilt the balance against the regime.
The West is keen to see a single, credible, unified opposition leadership body in order to persuade the Russians and Chinese, who are blocking a unified international stance at the UN, that there is a viable alternative to the Assad regime.
The idea is that the opposition would negotiate arrangements for a peaceful transition with what is left of the regime once Mr Assad and his top entourage stand down.
Mr Assad is not ready to do that yet - opposition leaders say that will require a change in the balance of power on the ground.
The Western powers insist they will not give much-needed anti-aircraft missiles and other weapons to the rebels - though the opposition is hoping the emergence of a new leadership will mean that other regional powers will be given a green light to increase arms flows.
The meeting will take place under the auspices of the Arab League, with Western powers from the international Friends of Syria group also taking part.
The key objective is to produce a unified, credible opposition leadership firmly rooted inside Syria itself, which would then be recognised by the Friends of Syria as the sole legitimate representative of the Syrians, the BBC's Jim Muir reports from Doha.
Few expect that to be achieved in one day of talks, so the meeting could be the beginning of a longer process. However, there is strong pressure to produce swift results, he adds.
The SNC's failure to present a united front against President Assad has previously brought widespread criticism.
The US has said it wants to set up a broader opposition leadership council in which the SNC's influence is diluted.
The Syrian National Initiative, proposed by prominent dissident Riad Seif, would supplant the SNC and bring together Syria's exiled and internal opposition, allowing it to become the conduit for foreign assistance.
Also on Thursday, the Israeli military said at least one mortar landed in the Israeli-occupied Golan Heights. No damage or injuries were reported.
In recent days, an Israeli border patrol vehicle was been hit by Syrian gunfire in the Golan Heights and three Syrian tanks entered the demilitarised buffer zone, the Israeli military say.
at November 08, 2012