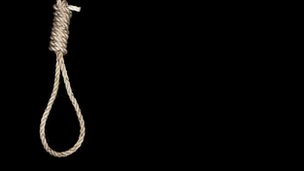 There are about 8,000 condemned prisoners in Pakistan, rights groups say
A Pakistani soldier sentenced to death four years ago has become the first man to be executed in the country for four years, officials say.
Muhammed Hussain was condemned in 2008 for murdering his senior officer.
He was hanged at a jail in Punjab province early on Thursday morning. All his appeals for mercy were rejected.
Correspondents say that there has been an unofficial moratorium on executions since a few months after the Pakistan People's Party came to power in 2008.
Every three months the president's office issues a letter which has put a stay on all capital punishment - a routine that has been in operation for the last few years.
Correspondents say it is not clear why Mr Hussain's case proved an exception to the rule - some commentators say it could be because he was tried by a military court.
It is thought that there are about 8,000 people currently on death row in Pakistan - rights groups say it has one of the largest numbers of prisoners on death row in the world.
Media reports say that Mr Hussain's plea for clemency to President Asif Ali Zardari was rejected in December 2011.
at November 15, 2012