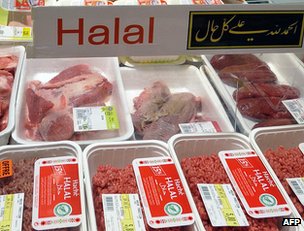 Halal meat can be found on sale across the EU

Poland's top court has ruled that the religious slaughter of animals is illegal, weeks before an EU law allowing the practice takes effect.

The Constitutional Tribunal said it was against Polish law to allow animals to have their throats cut and bleed to death without first being stunned.

Poland has small Muslim and Jewish communities who use such methods.

Poland now has until the end of the year to decide whether to opt out of the new EU law allowing the practice.

Poland's Agriculture Minister Stanislaw Kalemba told Polish radio the EU law took precedence, and would remove any doubt about the legality of the practice in Poland.

His ministry has awarded licences to at least 17 slaughterhouses to carry out killing of animals according to Jewish or Muslim guidelines.

Sweden is so far the only state in the EU which has banned the religious - sometimes called ritual - slaughter of animals.
'Up to us'
The Polish court considered the case following a petition by animal welfare groups, Polish radio reports.

Attorney General Andrzej Seremet, at the request of animal rights' groups, argued that a 2004 amendment allowing ritual slaughter on religious grounds was unconstitutional in that it contravened animal rights legislation dating back to 1997.


Under the 1997 laws, slaughter should only "follow the loss of consciousness" after a farm animal is stunned.

Animal welfare campaigners stressed that Poland had the option of exemption from the incoming EU regulations.

"It's up to us to decide whether we want a law authorising this kind of slaughter or not," Dariusz Gzyra of the campaign group Empatia told AFP news agency.

However, in Poland - unlike in the Netherlands, whose lower house of parliament voted to outlaw ritual slaughter before a compromise was reached - there is no political support for a ban, says the BBC's Adam Easton in Warsaw.

Critics fear the court's ruling will send a message of intolerance to religious minorities in Poland, a bastion of Roman Catholicism in Europe.

Referring to last year's debate in the Netherlands, he said there was "a crisis of tolerance" in Europe.

Responding to the court ruling in Poland, Piotr Kadlcik, president of the country's Union of Jewish Communities, said it appeared to contradict a 1997 Polish law on relations between his Union and the Polish state.

"It appears there is a legal contradiction here and it is too early to tell what this means," he was quoted as saying by The Times Of Israel.

"We are seeking legal advice on this right now."
Big business
Kosher meat (slaughtered according to Jewish practice) has particular significance in Poland because the country was Europe's Jewish heartland before the Nazi Holocaust.

Some 90% of Poland's Jewish population of three million were murdered. Today just 6,000 Jews remain in a country of 38.3 million, according to the European Jewish Congress.

Poland's Muslims can be numbered in the tens of thousands.

However, Poland is now a producer of both kosher and halal (slaughtered according to Islamic practice) meat for export, selling to Arab countries, Turkey and Israel, the Polish newspaper Gazeta Wyborcza reports.

The new EU regulation notes that the EU allows a "derogation from stunning in case of religious slaughter taking place in slaughterhouses".

"It is important that derogation from stunning animals prior to slaughter should be maintained, leaving, however, a certain level of subsidiarity to each Member State," it says.
at November 28, 2012