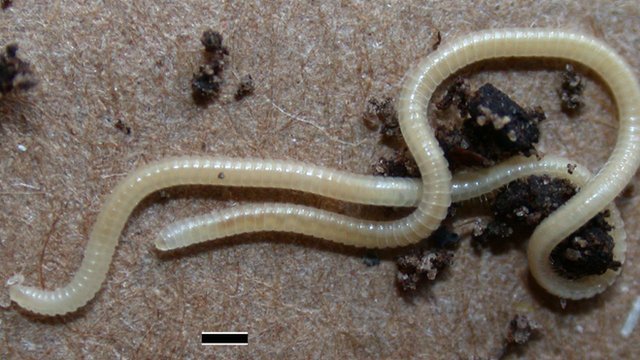 Paul Marek talks to Rebecca Morelle about why this creature has so many legs and how it compares with other millipedes (Footage: Paul Marek)
Continue reading the main story

The anatomical secrets of the world's leggiest creature, a millipede with 750 legs, have been revealed by scientists.
The species, called Illacme plenipes, was first seen 80 years ago but was recently rediscovered in California.
Now researchers have found that as well as bearing an extreme number of legs, the creature may have more in common with millipedes that lived millions of years ago than today's species.
The study is published in the journal ZooKeys.
"It's a kind of mythical creature in the millipede world," said Dr Paul Marek, an entomologist from the University of Arizona and the lead author of the paper.
Record breaker
In 2005, Dr Marek and his brother discovered some of the leggy arthropods lurking under boulders in the mountains of California. Until then, I.plenipes had not been glimpsed since 1926.
A paper published in the journal Nature outlined the rediscovery and described the creature's basic biology, but the new research looked at the creature's anatomy in much more detail. 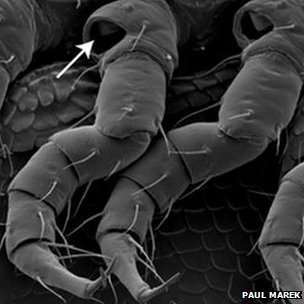 Using scanning electron microscopes the researchers were able to look at the creature's legs in detail
Despite the name - most millipedes have far fewer than 1,000 feet. Most species belonging to the most common order Polydesmida have an average of just 62.
But Dr Marek confirmed that I.plenipes safely holds the record for the leggiest creature: females can have up to 750 legs, while males have up to 562.
"It seems like these legs evolved for their subterranean lifestyle," he explained.
"They live deep underground: we found them about 10-15cm (4-6in) below the soil's surface.
"They are typically found clinging onto sandstone boulders. Based on functional morphology of closely related species, it seems like all of these legs evolved to burrow under the ground and to cling onto these large boulders."
Though they have many limbs, the creatures are small, measuring about about 3cm-long (1in).
Open wide
Close examination of the creature revealed that it had some ancient features.
Continue reading the main story

Its anatomy retains a number of primitive characteristics”

Dr Paul MarekUniversity of Arizona
Most millipedes chew leaves and decaying vegetation with grinding mouth parts.
But the scientists found that this species had a more rudimentary anatomy. Its jaws are fused to its head, and Dr Marek believes that it pierces and then sucks up plant and fungal tissues to satisfy its appetite.
The creature's body segments were also more similar to ancient millipedes than to most other species found today.
Dr Marek said that millions of years ago creatures like I.plenipes would have been widespread, but now it was one of the last of its kind.
He explained: "It is a relict species. Its most closely related lineages are in South Africa and there is nothing related to this species in the entire North America region. Its anatomy retains a number of primitive characteristics." 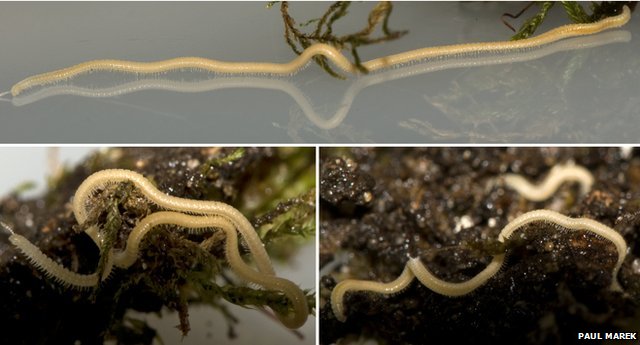 The millipede with the most legs is found clinging to boulders in a few areas close to San Francisco in California
The animal, which also has a number of other unusual features such as body hairs that secrete silk, is thought to be extremely rare and only found in a small area close to San Francisco.
Dr Marek said: "Based on our search of the area, it seem like it is known in three spots - and these spots are about 4.5km (3 miles) away from one and other.
"It does seem that this creature is restricted both in terms of geography and also evolutionarily."
Dr Marek, a self-confessed millipede enthusiast, said that rediscovering the record breaking creature was a staggering experience, but that it would be "awesome" if someone unearthed an even leggier creature.
He said: "The name millipede would no longer be a misnomer - it would only need to add a few more segments to get an even 1,000 (legs), which would be fantastic."
at November 15, 2012

Binary Options is the way to [url=http://www.brokersring.com/]make money[/url] securely online