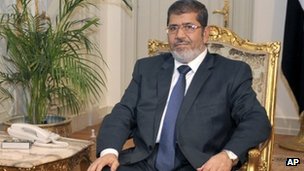 Opposition leaders in Egypt have called for large protests after President Mohammed Mursi passed a decree giving himself sweeping new powers.
The decree states the president's decisions cannot be revoked by any authority - including the judiciary.
It also opens the way for a retrial of people convicted of killings during Egypt's 2011 uprising which toppled President Hosni Mubarak.
Mr Mursi's critics have denounced the move as a "coup against legitimacy".
In a joint news conference on Thursday, Sameh Ashour, head of the lawyers syndicate, and key opposition figures Mohamed ElBaradei and Amr Moussa accused Mr Mursi of "monopolising all three branches of government" and overseeing "the total execution of the independence of the judiciary".
"We are calling on all Egyptians to protest in all of Egypt's squares on Friday," they said.
Mr ElBaradei, a Nobel Peace Prize winner, wrote on his Twitter account that the president had "appointed himself Egypt's new pharaoh. A major blow to the revolution that could have dire consequences".
Continue reading the main story

Yolande KnellBBC News
He might be riding high in international opinion because of his role helping to secure a ceasefire between Israel and Gaza, but Egypt's President Mursi is still facing pressing domestic issues.
Mr Mursi's announcement that he is sacking the unpopular public prosecutor - an appointee of his predecessor - and ordering the retrial of leaders of Hosni Mubarak's regime - is an attempt to satisfy the demands of the young "revolutionaries".
Yet many will be alarmed by the extensive powers that the president has now granted himself - largely to see off ongoing legal challenges.
The constituent assembly drawing up the new constitution - which is dominated by Islamists and criticised by secular political forces - is being given special protection to complete its work so that Egypt has a new governing document and can proceed to new legislative elections.
But of most concern is the line that Mr Mursi's decisions "are final and cannot be contested". He starts to sound more powerful than the autocratic leader that Egyptians rose up to overthrow.
Wael Ghonim, a key figure in the uprising, said the revolution had not been staged "in search of a benign dictator".
"There is a difference between revolutionary decisions and dictatorial decisions," he said.
But Mr Mursi's supporters say the move will protect Egypt's revolution. Thousands celebrated the decree in front of the Egyptian High Court in Cairo on Thursday night.
Mahmoud Ghozlan, spokesman for Mr Mursi's Muslim Brotherhood party, described it as "revolutionary and popular."
The BBC's Jon Leyne in Cairo says that after brokering a ceasefire between Israel and Hamas over the Gaza crisis, Mr Mursi has won a new international prestige, and must believe this will help him weather the domestic storm.
Mubarak retrial?
Mr Mursi said his decree was aimed at "cleansing state institutions" and "destroying the infrastructure of the old regime".
It bans challenges to his decrees, laws and decisions, and says no court can dissolve the constituent assembly, which is drawing up a new constitution.
Mr Mursi also sacked chief prosecutor Abdel Maguid Mahmoud and ordered the retrial of people accused of attacking protesters in the uprising, which could lead to the retrial of Mubarak himself, who is serving a life sentence.
Mr Mahmoud's acquittal of officers accused of involvement in attacks on protesters led to violent clashes in Cairo's Tahrir Square in October, when supporters and opponents of Mr Mursi clashed.
Continue reading the main story

Thousands of protesters have returned to the streets around Tahrir Square over the past week demanding political reforms and the prosecution of officials blamed for killing demonstrators.
The president had tried to remove Mr Mahmoud from his post by appointing him envoy to the Vatican.
But Mr Mahmoud defied the Egyptian leader and returned to work, escorted by judges and lawyers.
New prosecutor Talaat Ibrahim is tasked with re-examining all the investigations led by Mr Mahmoud into the deaths of protesters, and re-trying people already acquitted in the case.
The declaration also gives the 100-member constituent assembly two additional months to draft a new constitution, to replace the one suspended after Mr Mubarak was overthrown.
The rewrite of the constitution, which was meant to be finished by December, has been plagued by lawsuits questioning the make-up of the constituent assembly.
Once completed, the document is due to be put to a referendum. If it is approved, legislative elections will be held two months later.
at November 23, 2012