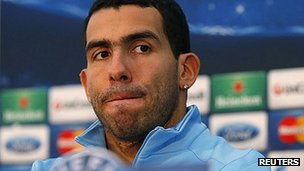 Tevez was not present at Lancaster Magistrates' Court for the hearing
Manchester City footballer Carlos Tevez has been banned from driving after failing to provide information when he was stopped for speeding in Lancashire.
The Premier League striker was stopped by police after breaking the speed limit in Morecambe on 28 March.
He had been in the town playing in a reserve team game.
Tevez, from Prestbury in Cheshire, was given an interim ban by Lancaster magistrates. He will have the length of his suspension set in December.
at November 26, 2012