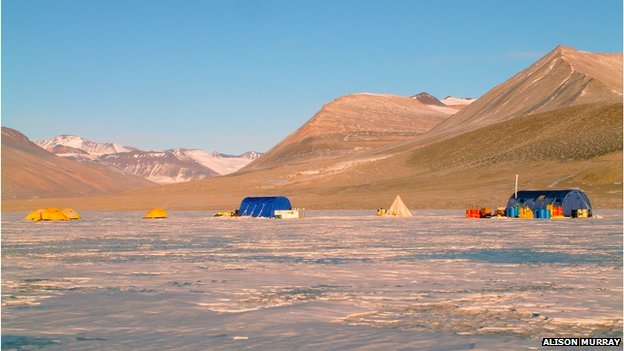 Researchers worked under secure, sterile tents on the lake's surface to keep the site and equipment clean
Continue reading the main story

The discovery of microbes thriving in the salty, sub-zero conditions of an Antarctic lake could raise the prospects for life on the Solar System's icy moons.
Researchers found a diverse community of bugs living in the lake's dark environment, at temperatures of -13C.
Furthermore, they say the lake's life forms have been sealed off from the outside world for some 2,800 years.
Details of the work have been outlined in the journal PNAS.
Lake Vida, the largest of several unique lakes found in the McMurdo Dry Valleys, contains no oxygen, is acidic, mostly frozen and possesses the highest nitrous oxide levels of any natural water body on Earth.
A briny liquid that is approximately six times saltier than seawater percolates throughout the icy environment.
Dr Cynan Ellis-Evans, from the British Antarctic Survey (Bas), who was not involved in the recent research, told BBC News: "There are various lakes that are very salty down there... but this is a really freaky one.
"It's almost frozen solid right to the bottom. But you've got this brine 'mush' in the centre. For several years, they've been trying to get into it."
He said the discovery of microbes at such low temperatures was "a very interesting discovery".
During field campaigns in 2005 and 2010, Alison Murray, from the Desert Research Institute (DRI) in Reno, Nevada, and colleagues drilled out cores of ice from the lake, collected samples of the brine from the frozen material, and assessed the water's potential for harbouring life. 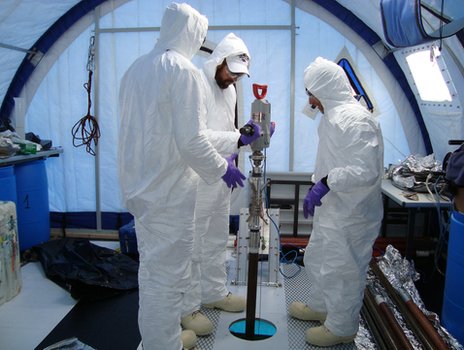 The team retrieved cores from the lake during campaigns in 2005 and 2010
To avoid contaminating the isolated ecosystem, they used stringent procedures and specialised equipment, working under secure, sterile tents on the lake's surface.
The abundance of different chemical compounds present in the lake led the researchers to conclude that chemical reactions were taking place between the brine and the underlying iron-rich sediments, producing the nitrous oxide and molecular hydrogen.
The hydrogen, in part, may provide the energy needed to support the brine's diverse microbial life. In addition, the slow rate of metabolism of these microbes prevents the energy reserves from being quickly depleted.
"It's plausible that a life-supporting energy source exists solely from the chemical reaction between anoxic salt water and the rock," said co-author Dr Christian Fritsen, also from the DRI.
If this is indeed the case, said Dr Murray, it provides "an entirely new framework for thinking of how life can be supported in cryo-ecosystems on Earth and in other icy worlds of the Universe".
Jupiter's icy moon Europa represents one such target.
Dr Ellis-Evans commented: "If you go to somewhere like Europa, this sort of finding is really of interest. You can apply this more or less directly.
He pointed to recent evidence that pockets of slushy ice and liquid water might also persist in Europa's ice shell: "That would be just the sort of system we're talking about here, with limited connections to the outside world," he said.
The PNAS report's publication comes as scientists fly out of the UK to join an effort to drill through the 3km of ice covering Lake Ellsworth, which is hidden beneath the West Antarctic Ice Sheet.
The discovery of any microbial communities here would be significant because the lake water may have been sealed off from the outside world for up to half a million years.
Late last year, a Russian team drilled through to Lake Vostok, an even larger lake covered by some 4km of ice. But preliminary analyses of lake water that froze on to the drill bit showed scant evidence for the presence of living organisms.
Paul.Rincon-INTERNET@bbc.co.uk
at November 27, 2012