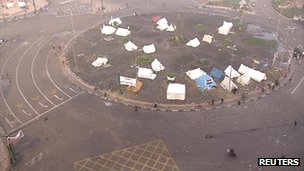 Crowds of anti-government protesters dispersed from Cairo's Tahrir Square overnight after apparently being targeted with tear gas.
Hundreds of people had launched a sit-in late on Friday and vowed to stay for a week, but by morning few remained.
Supporters and critics of President Mohammed Mursi demonstrated on Friday.
Mr Mursi has polarised opinion after he passed a decree giving himself almost unchecked power. He says he is leading Egypt to "freedom and democracy".
The Obama administration has voiced concern about developments.
Tear gas in Tahrir
Overnight, some 20 white tents were pitched in the middle of Cairo's totemic Tahrir Square, where Egyptians celebrated the ousting of President Hosni Mubarak last year.
Protest organisers said more than 20 different groups had joined the week-long sit-in against Mr Mursi's reforms.
Numbers of protesters have ranged from a few hundred to a few thousand.
Continue reading the main story

They say the new president is becoming as much of a dictator as long-time ruler Hosni Mubarak.
The protesters have two demands: to reverse the president's constitutional declaration, and to dissolve the constituent assembly that is currently drafting Egypt's new constitution.
But by Saturday morning there were few protesters left.
Dozens of messages on Twitter said protesters were forced to abandon the camp after being targeted with tear gas.
Separately on Friday evening another set of anti-Mursi protesters clashed with police near the interior ministry off Tahrir Square.
Police fired tear gas and demonstrators threw petrol bombs.
Chants of "Mursi is Mubarak... revolution everywhere" rang out.
Almost 100 people were injured in violence as offices of the president's Muslim Brotherhood party were reportedly attacked in the cities of Port Said, Suez and Ismailia, while clashes between rival demonstrations took place in Alexandria.
Defending his decision at a rally at Cairo's presidential palace on Friday, Mr Mursi said he was the guardian of political, economic and social stability, but that he wanted to see a "genuine opposition, a strong opposition".
Key opposition figures have accused the president of "monopolising all three branches of government" and overseeing "the total execution of the independence of the judiciary".
US state department spokeswoman Victoria Nuland said on Friday that the decree had "raised concerns" in the international community.
She said Egypt's revolution had aimed "to ensure that power would not be overly concentrated in the hands of any one person or institution".
She said the US wanted democratic dialogue within Egypt to solve constitutional issues.
The rapid turn of events may have caught Washington by surprise, says the BBC's Steve Kingstone in Washington.
Only on Wednesday, Secretary of State Hillary Clinton met Mr Mursi in Cairo and praised him for his efforts in brokering the ceasefire in Gaza.
Constitution rewrite
The new decree bans challenges to Mr Mursi's laws and decisions, and says no court can dissolve the constituent assembly, which is drawing up a new constitution.
It also opens the way for a retrial of people convicted of killings during Egypt's 2011 uprising which toppled Mubarak.
The declaration also gives the 100-member constituent assembly two additional months to draft a new constitution, to replace the one suspended after Mubarak was overthrown.
The rewrite of the constitution, which was meant to be finished by December, has been plagued by legal complaints questioning the make-up of the constituent assembly.
Once completed, the document is due to be put to a referendum. If it is approved, legislative elections will be held two months later.
at November 23, 2012