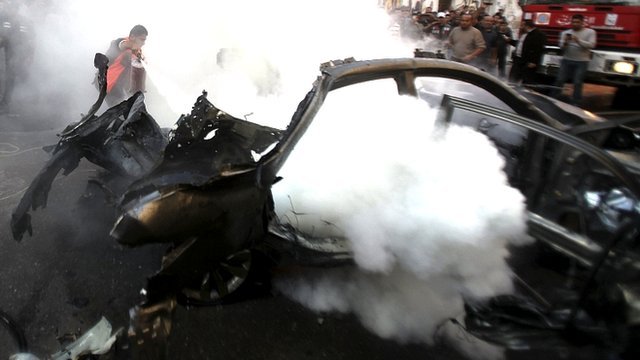 The BBC's Wyre Davies: "The violence in and around the Gaza Strip has been escalated"
Continue reading the main story

Israeli Prime Minister Benjamin Netanyahu has said the country's military is prepared to extend its operation against Palestinian Islamist group Hamas in the Gaza Strip.
His comments came after the head of the military wing of Hamas, Ahmed Said Khalil al-Jabari, was killed during Israeli air strikes on the territory.
These followed a wave of rocket attacks against Israel from Gaza.
Three Palestinian militants were killed fresh Israeli strikes on Thursday.
More rockets were fired from Gaza into Israel overnight, but Jon Donnison in Gaza City says so far the violence does not appear on the same scale as the last Gaza War almost four years ago when hundreds of Palestinians were killed on the first day of Israel's operation.
"We've sent a clear message to Hamas and to other terrorist organisations," Mr Netanyahu said in a televised address on Wednesday evening.
"And if there is a need, the Israeli Defence Forces are prepared to widen the operation. We will continue to do everything to defend our citizens."
Continue reading the main story

Mark TonerUS state department spokesman
Jabari and another Hamas official who died alongside him were among at least 10 people killed in Gaza on Wednesday by the Israeli strikes and that number would probably rise, the Palestinian envoy to the United Nations, Riyad Mansour, told reporters in New York.
Jabari, who was 46, is the most senior Hamas official to be killed in the Gaza Strip since the major Israeli offensive four years ago.
Outside the hospital to which Jabari's body was taken, angry Gaza residents chanted "retaliation" and "We want you to hit Tel Aviv tonight".
A number of injured civilians, including children, were seen being taken to hospital in Gaza City.
Hamas spokesman Abu Zuhri said: "Israel will regret the moment they even thought of doing this."
'No justification'
An emergency closed session of the UN Security Council was held at the request of Egypt late on Wednesday to discuss the situation.
Mr Mansour told the meeting that Israel was "vulgarly and publicly boasting about its wilful killing of Palestinians".
US Ambassador to the UN Susan Rice defended Israel's actions at the meeting, according to the AFP news agency.
"There is no justification for the violence that Hamas and other terrorist organisations are employing against the people of Israel," Mrs Rice told the session.
In other diplomatic reaction:
Neighbouring Egypt condemned the strikes, recalled its ambassador to Israel, summoned the Israeli ambassador in Cairo as well as calling for UN and Arab League meetings.
The BBC's Kevin Connolly, in Cairo, says Egypt's reaction to events in Gaza will be followed closely. 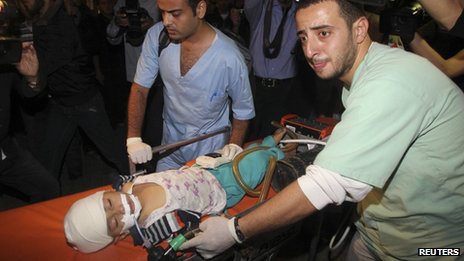 Civilians injured in the air strikes were rushed to Gaza's hospitals
It is the first time violence has reached this pitch of intensity since the events of the Arab Spring brought to power a president drawn from the ranks of the Muslim Brotherhood, the same organisation in which Hamas has its roots.
Palestinian Authority President Mahmoud Abbas, who is based in the separate West Bank territory, condemned the Israeli operation.
"President Mahmoud Abbas... warned of the seriousness of the Israeli escalation and demanded an immediate end to the aggression," a statement carried on the official Wafa news agency said.
'Blood on his hands'
Earlier, US State Department spokesman Mark Toner said in a statement that "we encourage Israel to continue to take every effort to avoid civilian casualties".
But, he added, "Hamas claims to have the best interests of the Palestinian people at heart, yet it continues to engage in violence that is counterproductive to the Palestinian cause".
Continue reading the main story

The British Foreign Office issued a statementsaying: "We continue to call on all sides to exercise restraint to prevent a dangerous escalation that would be in no-one's interests."
Israeli Defence Forces (IDF) spokeswoman Lt Col Avital Leibovich said Jabari had "a lot of blood on his hands".
She told BBC News that "close to 20" sites in Gaza had been targeted in a "limited" operation, with the strikes aiming to destroy rocket-firing capabilities.
"The operation against Hamas, Islamic Jihad and other organisations has two goals: to protect Israeli civilians and target the terror capability of these organisations," she added.
On its Twitter feed, the Israeli military said 17 rockets fired from Gaza had been successfully intercepted by Israel's "Iron Dome" missile defence system on Wednesday, but one had got through and hit a "southern Israeli city". This appeared to be a reference to Beersheba, where firefighters were seen extinguishing a burning car after a reported rocket strike.
It also claimed that Hamas's long-range missile capabilities and underground weapons storage facilities had been seriously damaged by Wednesday's strikes.
Israel has killed several senior Hamas figures in similar operations, including the movement's founder, Sheikh Ahmed Yassin, in 2004.
at November 15, 2012