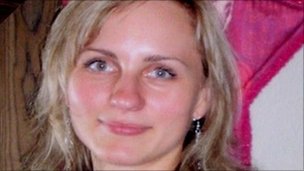 Vitalija Baliutaviciene was last seen alive leaving her home in Peterborough
A man who kidnapped and murdered his ex-wife in the UK before taking her body to Poland to bury it, has been jailed for life.
Vitalija Baliutaviciene, 29, had come to Peterborough only to escape the "obsessed" and "jealous" Rimas Venclovas, the Old Bailey heard.
Venclovas, 47, abducted her in August 2011. Her body was found in a shallow grave two months later.
He had denied kidnap and murder and will serve a minimum of 20 years.
Miss Baliutaviciene was last seen on CCTV being abducted on her way to work in Peterborough, at 05:15 BST on 12 August last year.
'Carefully-executed murder' 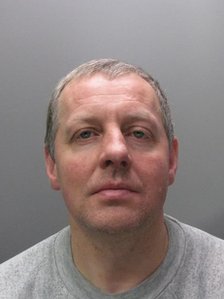 Venclovas will serve a minimum of 20 years for kidnap and murder
At about 11:50 BST, Venclovas's van was caught on CCTV boarding a ferry at Dover.
Lithuania-born Miss Baliutaviciene's naked body was found in a field in western Poland on 30 October last year.
The court heard her husband had twice been arrested by police in Peterborough for attacking her.
However, after being granted bail he absconded to his native Lithuania each time, before returning to the city.
During the trial, he said he and Miss Baliutaviciene had been "getting on well" at the time he kidnapped and murdered her.
He said: "I never threatened her."
As he passed sentence, Mr Justice Fulford said: "This was a coldly and carefully-executed murder."
'Evil man'
He added he had no doubt Venclovas did not kill Miss Baliutaviciene immediately but tortured her by holding her throat and "keeping her between life and death".
Miss Baliutaviciene's mother, Vanda Cerneckaite, 64, and her brother, Audrius Sreberis, 30, said in a statement: "Our lives stopped the day she disappeared and they will never be the same again.
"Rimas is an evil man who went to great lengths in order to kidnap and kill our beloved Vitalija.
"Her son clung to the glimmer of hope that she was still alive and would come back to him.
"Rimas had the power to end that pain and uncertainty and allow his own son to start to grieve.
"He selfishly chose not to do so however, and has continued to prolong that suffering through his lies and denial as he sought to save his own skin.
"There can be no justification for the level of violence he used against such a kind and gentle woman who posed no threat to him."
at November 12, 2012