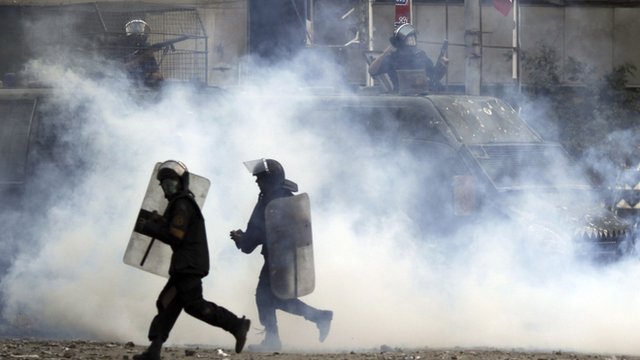 The assembly writing a new Egyptian constitution says it hopes to vote on a draft version as early as Thursday.

The news came as the constitutional court indicated it would rule on Sunday whether to dissolve the assembly.

Egypt's judiciary is in a stand-off with President Mohammed Mursi and his Islamist supporters, after Mr Mursi last week issued a decree granting himself sweeping new powers.

The decree has sparked huge protests across the country.

As those protests continued on Wednesday, officials at the constituent assembly said it was finishing its draft constitution, even though Mr Mursi had recently extended its deadline to complete the work until February.

A vote was expected on Thursday, state media reported.

The BBC's Jon Leyne, in Cairo, says issuing a constitution in these circumstances would be a deeply inflammatory move.

Opposition figure and former Arab League chief Amr Moussa told Reuters news agency: "This is nonsensical and one of the steps that shouldn't be taken, given the background of anger and resentment to the current constitutional assembly."
'Sacred mission'
The constituent assembly is dominated by the Muslim Brotherhood and other Islamists, who back Mr Mursi.

Liberal, left-wing and Christian members have boycotted the body, accusing the Islamists of trying to impose their vision.

Its latest move appeared to be aimed at dodging a ruling by the constitutional court on Sunday on whether the assembly should be dissolved.

The constitutional court's deputy chairman, Maher Sami, said in a televised speech that the ruling would go ahead.

"The court is determined to rise above its pain and continue its sacred mission until the end, wherever that takes us," he said.

The court has already dissolved the lower house of Egypt's parliament, which was led by the Muslim Brotherhood.

The declaration that sparked protests gave Mr Mursi powers to take any measures to protect the revolution, and stated that no court could overturn his decisions.

It is valid until a new constitution is in place.

Supporters say the decrees were needed to protect the gains of the revolution against a judiciary with deep ties to overthrown President Hosni Mubarak.

On Monday, Mr Mursi sought to defuse the crisis by telling senior judges that the decrees would be restricted to "sovereign matters" designed to protect institutions.

But judges who attended the meeting said they were not satisfied and wanted the measure completely withdrawn.

On Wednesday, judges called a strike, saying appeals courts and the court of cassation would halt work until the decree was revoked.

The president was expected to make a televised address to the nation about the decree late on Thursday.

There have been running protests since the decree was issued, often spilling over into violent clashes between protesters and riot police.

The Muslim Brotherhood and the more radical al-Nour party have called for a counter-protest in Cairo on Saturday.

If approved by the constituent assembly, the draft constitution would then be put to a national referendum.
at November 28, 2012