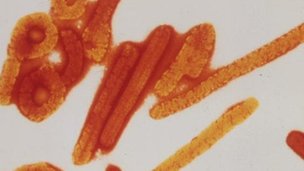 A fresh outbreak of the deadly Ebola virus in Uganda has killed at least two people, the health ministry has said.
Two members of the same family died over the weekend in a district not far from the capital, the health minister told the AFP news agency.
An estimated 17 people died in western Uganda of the haemorrhagic fever during an outbreak in July.
According to the medical charity Medecins Sans Frontieres (MSF), there had been no cases since August.
Health Minister Christine Ondoa told AP news agency that investigators had found conclusive evidence of Ebola in Luweero, about 60 km (37 miles) from the capital, Kampala.
There is no known cure for Ebola, but patients can be treated for their symptoms with antibiotics, drugs for pain relief and for other diseases such as malaria, to strengthen their resistance.
Uganda has seen several major Ebola outbreaks over the past 12 years.
The deadliest was in 2000 when 425 people were infected. More than half of them died.
at November 15, 2012