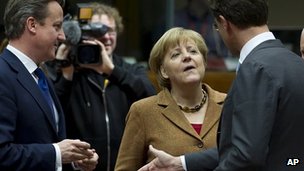 German Chancellor Angela Merkel says she doubts an agreement can be reached on the European Union's next budget at the summit taking place in Brussels.
She spoke after negotiations on the 2014-2020 budget were adjourned until midday on Friday (11:00 GMT).
The opening of the summit was delayed for three hours because of stark differences over the budget plans.
Most EU members support an increase in the budget but several countries say it is unacceptable at a time of austerity.
Earlier, President of the European Council Herman Van Rompuy circulated a revised proposal for the new budget and said he believed that a compromise was possible.
"I think we're advancing a bit, but I doubt that we will reach a deal," Mrs Merkel said.
She has previously said that another summit may be necessary early next year if no deal can be reached now.
Continue reading the main story

Europe's leaders predicted a bitter battle over the budget. And they were right. They drifted away into the night in pessimistic mood”

Gavin HewittEurope editor
French President Francois Hollande also cautioned that an agreement might not be possible.
But he added: "We should not consider that if we don't get there tomorrow or the day after, all would be lost."
The 90-minute session late on Thursday followed a gruelling day of face-to-face meetings between Mr Van Rompuy and each of the bloc's leaders, followed by a flurry of backroom discussions.
Before suspending talks, leaders nominated Luxembourg's Yves Mersch to the executive board of the European Central Bank.
'Not happy'
The EU Commission, which drafts EU laws, has called for an increase of 4.8% on the 2007-2013 budget.
The UK is the most vocal of EU member states seeking cuts in the budget to match austerity programmes at home.
"No, I'm not happy at all," Prime Minister David Cameron said about Mr Van Rompuy's offer to cap spending at 973bn euros (£783bn; $1.2trn).
Continue reading the main story

"Clearly, at a time when we're making difficult decisions at home over public spending, it would be quite wrong - it is quite wrong - for there to be proposals for this increased extra spending in the EU."
A Downing Street statement after the meeting said Mr Cameron had stressed the importance of the UK keeping its budget rebate, worth 3.5bn euros in 2011.
The statement called the rebate "fully justified". The EU Commission and some EU governments want the rebate scrapped.
Mr Cameron has warned he may use his veto if other EU countries call for any rise in EU spending. The Netherlands and Sweden back his call for a freeze in spending, allowing for inflation.
Poland and its former-communist neighbours, which rely heavily on EU cash, want current spending maintained or raised.
Mr Hollande has also called for subsidies for farming and development programmes to be sustained for poorer nations.
France has traditionally been a big beneficiary of EU farm support.
Failure to agree on the budget would mean rolling over the 2013 budget into 2014 on a month-by-month basis, putting some long-term projects at risk.
Analysts say that could leave the UK in a worse position, because the 2013 budget is bigger than the preceding years of the 2007-2013 MFF.
The UK government could then end up with an EU budget higher than what it says it will accept now.
at November 23, 2012