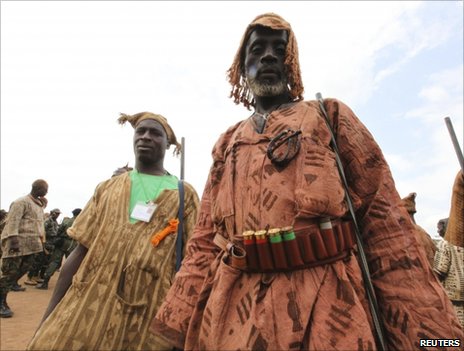 More than half a million refugees who fled their homes in Ivory Coast during the recent crisis fear to return, Amnesty International reports.
Militia loyal to new President Alassane Ouattara have not been disbanded and continue intimidating supporters of ex-President Laurent Gbagbo, it says.
Mr Gbagbo is under house arrest in the north of the country.
Amnesty urged the new government to establish a clear chain of command among pro-Ouattara forces.
Mr Gbagbo refused to accept defeat in last year's presidential elections, which were certified as legitimate by the UN.
It is nearly three months since the end of major fighting and members of ethnic groups seen as supportive of the former president continue to report intimidation.
Deserted villages The west of the country remains the most tense after years of community tensions and the recent massacre of hundreds of civilians there during the fighting itself.
Much of the violence at the time was blamed on traditional hunters called the dozos, whose continuing presence in the region, according to Amnesty, is preventing many people returning to their homes.
Around 150,000 people are sheltering just over the border in Liberia.
Nevertheless, the UN says at least 50,000 have returned from Liberia, while other families have started coming out of the forests where they went into hiding during the conflict.
Many, though, face the challenge of rebuilding homes that have been completely looted and destroyed.
In some parts of the west, the UN report up to three-quarters of the villages remain uninhabited.
at July 27, 2011