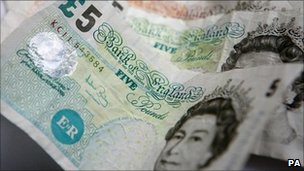 A record £1bn in assets linked to organised criminals were seized or frozen in the UK last year, according to Home Office figures.
The figures come as officials announce a five-year strategy for England and Wales.
Ministers are promising to make it easier for police to confiscate proceeds of crime in the UK and abroad.
The key threats targeted by the strategy include drugs, human trafficking and financial offences.
Police estimate that organised crime involves 6,000 groups, up to 38,000 people and that it could cost the economy between £20bn and £40bn a year.
The Home Office says that law enforcement agencies seized £161m in assets from offenders across the UK in the year to April 2011.
Gangs were also deprived of a further £800m, largely through police freezing their assets. Another £50m was returned to victims.
The £161m is the highest amount recovered in a single year since the introduction of key asset-seizing powers under the Proceeds of Crime Act 2002.
The strategy, launched later on Thursday, is expected to place an emphasis on police doing more to connect local and regional investigations with efforts on a national and international level.
'Ill-gotten gains' Chief constables say that a great deal of ordinary crime, such as the theft of expensive cars or prostitution, can be linked to organised gangs who in turn are linked to major international enterprises such as drugs and counterfeiting.
Home Office Minister James Brokenshire said: "Organised crime has a local impact, but a global reach. To tackle it effectively we need a strategic, co-ordinated response at every level from community policing through to international partnership.
"The Organised Crime Strategy will bring a new emphasis on the prevention of organised crime alongside a greater push to ensure that more prosecution and disruption activity takes place against more organised criminals, at a reduced cost.
"This, alongside the launch of the new National Crime Agency means that we will ensure that those who commit serious and organised crime are tracked down, pursued, brought to justice and their ill-gotten gains are stripped away."
The Home Office has already pledged to introduce a national agency which would replace the current Serious Organised Crime Agency.
The new body will include the Child Exploitation and Online Protection Centre and elements of border policing.
It is not clear what relationship it will have with police in Scotland, where there is an existing organised crime strategy set at Holyrood.
at July 28, 2011