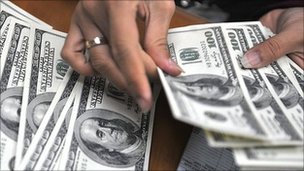 A lucky US mother and daughter from North Carolina have beaten all the odds by winning the lottery three times.
Kimberly McCauley won $100,000 (£60,000) in a new instant scratch-card game called "10X the Money".
In 2007, her mother won more than $161,000 in the state lottery - a meagre sum compared to her big win in 1991 of $15.5m in the New York Lotto.
Kimberly said she thought her mother was "hogging all the luck" and that she was overwhelmed by her win.
Kimberly took her mother with her to the lottery office to collect her prize.
The pair appeared to be calm, a spokesman for the North Carolina Education Lottery told ABC News.
"Once you win the lottery twice, what's a third time?" Ryan Kennemur said.
Kimberly said she was going to use the money to pay off her student loans and to buy a car.
"I never thought I'd win anything. This is so overwhelming, but it's a good kind of overwhelming," she told lottery officials.
at July 28, 2011