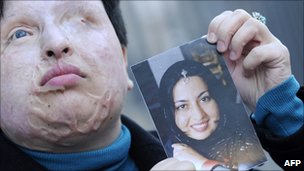 An Iranian man who was ordered to be blinded for carrying out an acid attack on a woman has been pardoned by his victim, state television has said.
Ameneh Bahrami had demanded qisas, a rarely used retributive justice under Sharia law, but the report said she had foregone that right at the last minute.
A court had backed Ms Bahrami's demand in 2008 that Majid Movahedi be blinded.
He attacked Ms Bahrami in 2004 after she had refused his offer of marriage, leaving her severely disfigured.
Rights group Amnesty International had lobbied against the sentence, calling it "cruel and inhuman punishment amounting to torture".
Mother's praise
The state television website reported: "With the request of Ameneh Bahrami, the acid attack victim, Majid (Movahedi) who was sentenced for 'qisas' was pardoned at the last minute."
Continue reading the main story

I had no intention of taking his eyes from him”

Ameneh Bahrami
The Isna news agency quoted Tehran prosecutor Abbas Jafari Dolatabadi as saying: "Today in hospital the blinding of Majid Movahedi was to have been carried out in the presence of an eye specialist and judiciary representative, when Ameneh pardoned him."
Isna quoted Ms Bahrami as saying: "I struggled for seven years with this verdict to prove to people that the person who hurls acid should be punished through 'qisas', but today I pardoned him because it was my right.
"I did it for my country, since all other countries were looking to see what we would do."
Ms Bahrami was quoted on Iranian TV as saying: "I never wanted to have revenge on him. I just wanted the sentence to be issued for retribution. But I would not have carried it out. I had no intention of taking his eyes from him."
Mr Dolatabadi told Isna that Ms Bahrami had demanded "blood money", or compensation, for her injuries.
He praised her "courageous act" of pardon, adding: "The judiciary was serious about implementing the verdict."
Ms Bahrami said she had never received any money from the man's family, saying she was seeking only compensation for medical fees, which she put at 150,000 euros ($216,000: £131,000).
She said: "He wont be freed. He has a sentence, which he has to serve for 10-12 years of which he has done seven. Unless the full compensation is paid, he won't be freed."
Isna quoted Ms Bahrami's mother as saying: "I am proud of my daughter... Ameneh had the strength to forgive Majid. This forgiveness will calm Ameneh and our family."
at July 31, 2011