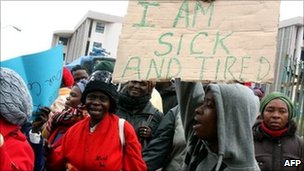 Some HIV-positive patients in Swaziland are so poor they have resorted to eating cow dung before taking anti-retroviral drugs, Aids activists say.
The drugs do not work on an empty stomach, so patients have to use the dung - mixed with water - instead of food, the activists say.
Several hundred people protested in the capital, Mbabane, on Wednesday against the economic crisis in the kingdom.
King Mswati III's government has admitted it is running out of cash.
It has asked neighbouring South Africa for a bailout.
'Prioritise health' Protest organiser Sipho Dlamini told the BBC that growing hunger was forcing HIV/Aids patients to eat cow dung.
"Some people are now saying they are going to stop taking anti-retroviral drugs because it [requires] that they have food in their stomachs," he told the BBC's Focus on Africa programme.
Swaziland, with a population of about 1.2 million, has one of the highest HIV/Aids rates in the world.
About 230,000 people are HIV-positive, of whom 65,000 get free drugs from government hospitals.
Mr Dlamini said the protesters urged the government not to cut health spending.
"We want the government to stick to its word and to prioritise health," he said.
Last month, MP Joseph Madonsela said state hospitals would run out of anti-retroviral drugs within two months.
This was denied by the government.
But it admitted that it had asked South Africa for a financial bailout and had introduced austerity measures to curb expenditure.
In May, the International Monetary Fund (IMF) said Swaziland was facing a "serious liquidity crisis".
The shortage of money forced King Mswati, who is sub-Saharan Africa's last absolute monarch, to cancel his silver jubilee celebrations this year.
He has an estimated personal wealth of $200m and each of his 13 wives has a palace paid for by the state, correspondents say.
at July 27, 2011

I was going to ask the broker (Paris Hilton's dad) of Candy Spellings home who sold it to the 22 year old heiress,(who will live in it only parttime) daughter of the Formula 21 founder, for 65 (or thereabouts) million dollar, if he could contact her so she could hold some fund raisers for charity (by giving tours of her home, while away,) so people wouldn't have to eat dung, until I read about the rulers of that country, shows that it's useless to give money to the continent of Africa, most of the rulers there are so corrupt, wish we had an official body to seize the money to redistribute it, (wonder of Republicans would rail against THIS redistribution!!